A truckload of charm and personality, along with a cartoon bird, make this show fly above other recent syndicated attempts and makes us hope we'll see a full series soon.

Now that the series is over check out our final thoughts on the trial run of Person Place or Thing.

Who would have figured that an incredibly basic, cheap quiz show with a cartoon bird would be one of my favorite new game shows of the last year or two? Fox First Run just wrapped up a four week trial of their newest quiz show Person Place or Thing on Friday (you can watch the full series on YouTube) and I hope it’s not the last we see of it. Its simple game, flaws and all, is more than made up for by a great host in Melissa Peterman and a boatload of charm. And a bird.

If you’ve played the game 20 Questions you know how Person, Place, or Thing goes. Contestants ask yes/no questions, along with getting clues provided by Melissa, to figure out the answer. The player with the most points at the end of the show has sixty seconds to guess a person, a place, and a thing for $2,000 and a trip.

Some of the show’s flaws are things I don’t think you can completely hold against them. It’s a super cheap show that’s taped on the same set as You Bet Your Life, another Fox First Run show. The payouts are meager. Clearly most contestants have no idea what’s going on. Those are things that are obviously fixable with a full series.

The game could use a little bit of work around the clues, however. The clues Melissa gives are often so specific that it makes the questions the contestants ask meaningless. This shows the most in the end game. I understand wanting to get through material as fast as possible but if the purpose is asking yes or no questions to guess a topic then I’d love to see them try to bring that out a bit more. The format is also heavily slanted towards the third round which renders the first two pretty meaningless. Some score balancing would benefit the actual game greatly.

The issues with the game are made up for by its charm and fun. It’s one of those game shows where you watch and go, “Oh yeah, game shows are supposed to be fun.” Melissa Peterman, a long-time game show veteran at this point, is as great a host as you’d expect. She keeps it light, funny, and genuinely seems like she’s having a great time. The production keeps the tone positive and doesn’t delve into deep moments of drama. It’s a shout-at-the-TV sort of game which is always nice.

The biggest positive for us, weirdly, is a cartoon bird. Having a bird (named Wally by our Cory Anotado) sit on the show’s logo and react to what’s going on is such a weird decision at first glance, but it brings so much to the entire package. It’s not in-your-face or obnoxious. It’s a fun and adorable little thing in the corner that brings a mountain of personality to the proceedings. I don’t know if giving the bird a larger role in the show in a full series would be overkill or not, but I wouldn’t be opposed to giving the bird a dedicated monitor somewhere on the set and letting him react a bit more with everything.

There are some game shows which are draining to get through. Whether it’s due to the game not being great or it’s just regularly emotionally exhausting some episodes (or some entire shows) are just not “fun”. Person Place or Thing has been a pleasant throwback to old school game shows which didn’t need to lay on the tension or emotions thick. They can just be a good time to decompress and smile, and it’s why I’ve been looking forward to this half hour of Person Place or Thing every weekday for the past four weeks. And I’m hoping I can look forward to more of it, and the bird, in 2023.

A truckload of charm and personality, along with a cartoon bird, make this show fly above other recent syndicated attempts and makes us hope we'll see a full series soon. 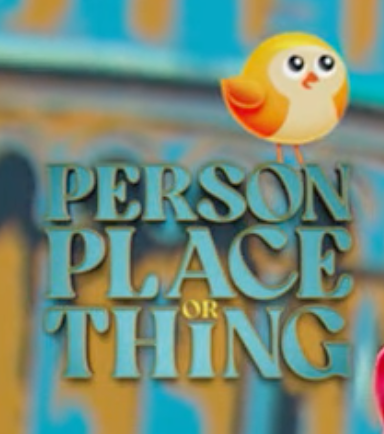