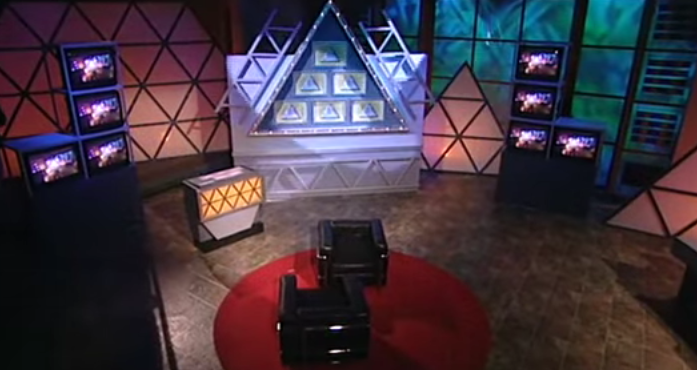 With Pyramid coming back, let’s take a look at some of the lesser known versions of the format, starting with this music inspired pilot.

In case you missed it yesterday, The $100,000 Pyramid is coming back to ABC! The Pyramid format, first launching as The $10,000 Pyramid in 1973, has been perpetually bouncing around the pilot or airing phases for over 40 years now. We know the biggest hits. Let’s take a look at some of the lesser known versions.

Let’s start with VH1’s unsold pilot for Pyramid Rocks. Hosted by Bil Dwyer, this version of Pyramid apes off the successful rock and roll-based Jeopardy! spinoff and injects music into the gameplay. Appearing as celebrities are Ellen Cleghorne & Riki Rachtman. The biggest difference between this Pyramid and others is each Winner’s Circle win gets you $5,000. Yeah it looks a bit cheap but, remember, it’s just a pilot.

We’ll have more looks at different kinds of Pyramid over the next few weeks to stay tuned.