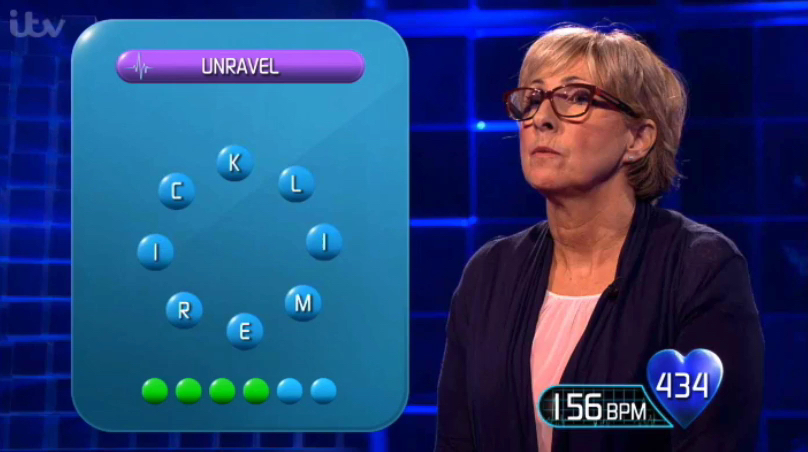 The answer will never be Milk Cire as much as you’d like it to be. That poor string quartet.

It’s obviously way harder to play a game show under the lights and with actual money on the line than sitting at home. There does come a point, though, when you’re the only person in the nation who doesn’t know an answer. That may have happened on today’s 1000 Heartbeats, ITV’s newest quiz show which makes people answer questions while trying to keep calm and their heart rate steady.

Contestant Amanda, who is apparently Anne Robinson’s long lost sister, is playing the game Unravel for £500. In this game the letters to a word are shown, in order, clockwise, in a circle form and spinning. You just have to guess the word. It’s tricky but once you find what the first letter or two is, it’s not that bad. However, she could just not figure out this game. The final word killed her. There’s a collection of wonderful guesses like, “Electric,” “Milk Cire,” and a very emphatic, “Miracle,” at the end. Not only does Vernon have a laugh, but the string quartet starts to crack also. Take a look at the funny moment below.

Note to contestants in series two: remember to just Step Off the plate if you don’t know, take the 50 heartbeat hit, and try again with a new word. Don’t waste your entire game in this scenario.