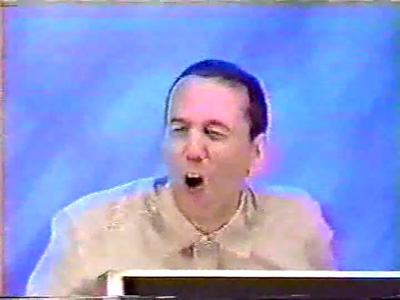 Welcome back to Biography’s tribute to Gilbert Gottfried.

The two best things in game shows are when someone wins big or something goes disastrously and hysterically wrong. Fifteen years ago, the latter happened on Hollywood Squares.

In 1999, during the second season of the Tom Bergeron-hosted version, all either contestant needs to do, to win the very first game of the show worth $1,000, is capture comedian Gilbert Gottfried’s square. What resulted is a ten minute jaw-dropping run of wrong answers that’s still hysterical 15 years later and has gone in game show lore as one of the funniest moments ever.

It’s the sheer insanity of this moment that makes it so memorable and funny. If the contestants kept missing easy questions no one would care. The fact that Gilbert (and others join in later) call the contestants, essentially, idiots turned it into a legendary episode. Watching the celebrities, especially Whoopi Goldberg, slowly lose all hope for humanity throughout the show is priceless. It’s a beautiful train wreck.

It’s also funny to watch the full episode (at the top) for this completely old school game which feels like it wouldn’t fit that well today. This show is dripping with 90s. It’s almost surreal to watch 15 years later, and it’s a few bottles of vodka away from being Match Game-level insane. Hollywood Squares managed to fit in the, “I don’t give a shit,” attitude of the 90s while it was still cool.