TruTV's Paid Off, premiering tonight, is activism-cum-Jeopardy, but do the parts make a convincing whole?

Part game show, part social commentary, Paid Off attempts to bring a bit of levity to the grave issue of student loan debt.

According to CNN, the average student loan debt of your average American college graduate is pushing $30,000, and it’s growing ever higher. Baby Boomers decided to seed future generations with the notion that getting a good job or even just living a good life meant going to college. (Even though 17-year-olds should never be responsible for thousands of dollars worth of life-changing decisions.) Then, they carpet-bombed the good jobs with stagnated wages and impossible barriers to entry. Then they raised housing prices, elected their peers to legislative positions then continually and systematically refused to legislate wages, incomes, student loans, or practically any meaningful legislation to help the majority of people who don’t already have wealth to accumulate wealth in any way.

In the face of all this, TruTV decided to make a game show about it. 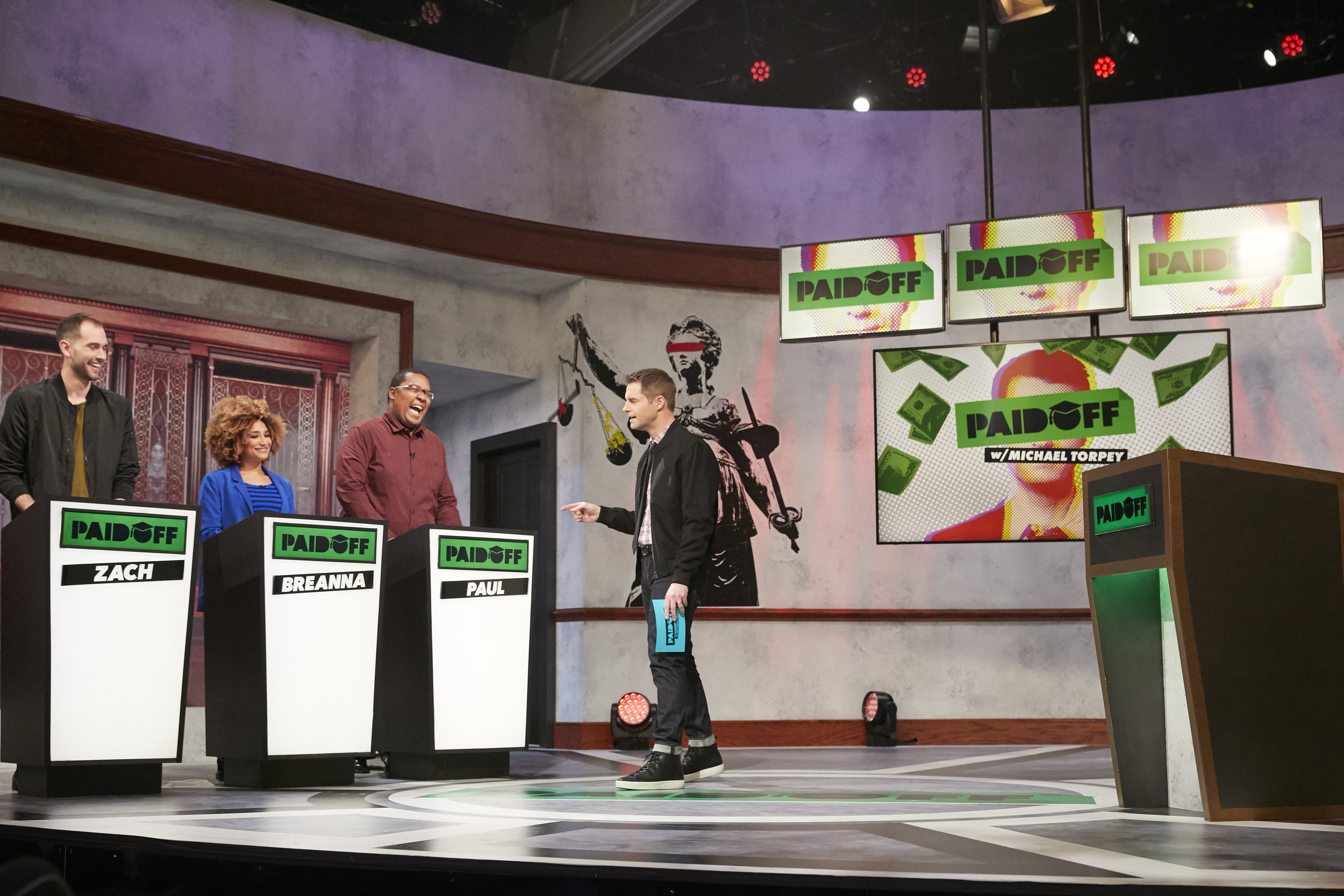 Instead of taking my idea, which was to throw knives at anyone who worked for Sallie Mae, TruTV teamed up with actor and comedian Michael Torpey to create Paid Off, a quizzer whose schtick of paying off people’s debts we’ve seen before, in Lifetime’s Debt, which premiered about 5 years after a mild recession in America. Now, 9 years after the Great Recession, we’re back again.

Unlike Debt, where players had somewhere between $5,000 and $10,000 worth of credit card debt to work off, players on Paid Off have four years of anthropology degrees and liberal arts educations hanging over their heads. In the premiere episode airing tonight, one contestant is starting with $41,222 worth of debt. (Chances are, she’s already paid $30,000 but that pesky interest is keeping her down. Fuck you, Navient.) One player in next week’s episode is playing the game toward lowering a bill of $8,480, which from here, seems luxuriously low. I bet he even pays his cellphone bill (you know, that necessity that baby boomers never needed to pay when they were our age) on time.

The first round of play is a general knowledge round with three categories, and correct answers are worth $100 each. Some categories have visual clues, which is nice. Peppered throughout the game are the chances to win “I Knew That” jokers, which will allow a contestant to piggyback off someone else’s correct answer down the line in the game to also get points. Round two is a Family Feud-style game that polled recent college graduates on different lifestyle questions. The player that gives the most popular answer gets $200. After each survey, a related follow-up trivia question is asked for another $200. After round 2, the player in last place is eliminated. In round 3, each player takes on a You Don’t Know Jack Dis-or-Dat style question, with what can best be described as “a loud and distracting noise” trying to throw them off their game. Correct answers are worth $200. The final round is a final Dis-or-Dat on the buzzer for both players, with three different choices. The player with the most money at the end of the final round moves to the bonus. All contestants leave with the money they earn in the game.

The final round is a set of 8 questions. Every correct answer will bank the player a certain percentage of their total debt (5%, 10%, 15%, 20%, 30%, 40%, 50%), but if the player gets all 8 correct in a minute or less, the player walks home with their college debt paid for. The player is given a choice between answering questions in the major they took in college, or in general knowledge questions. 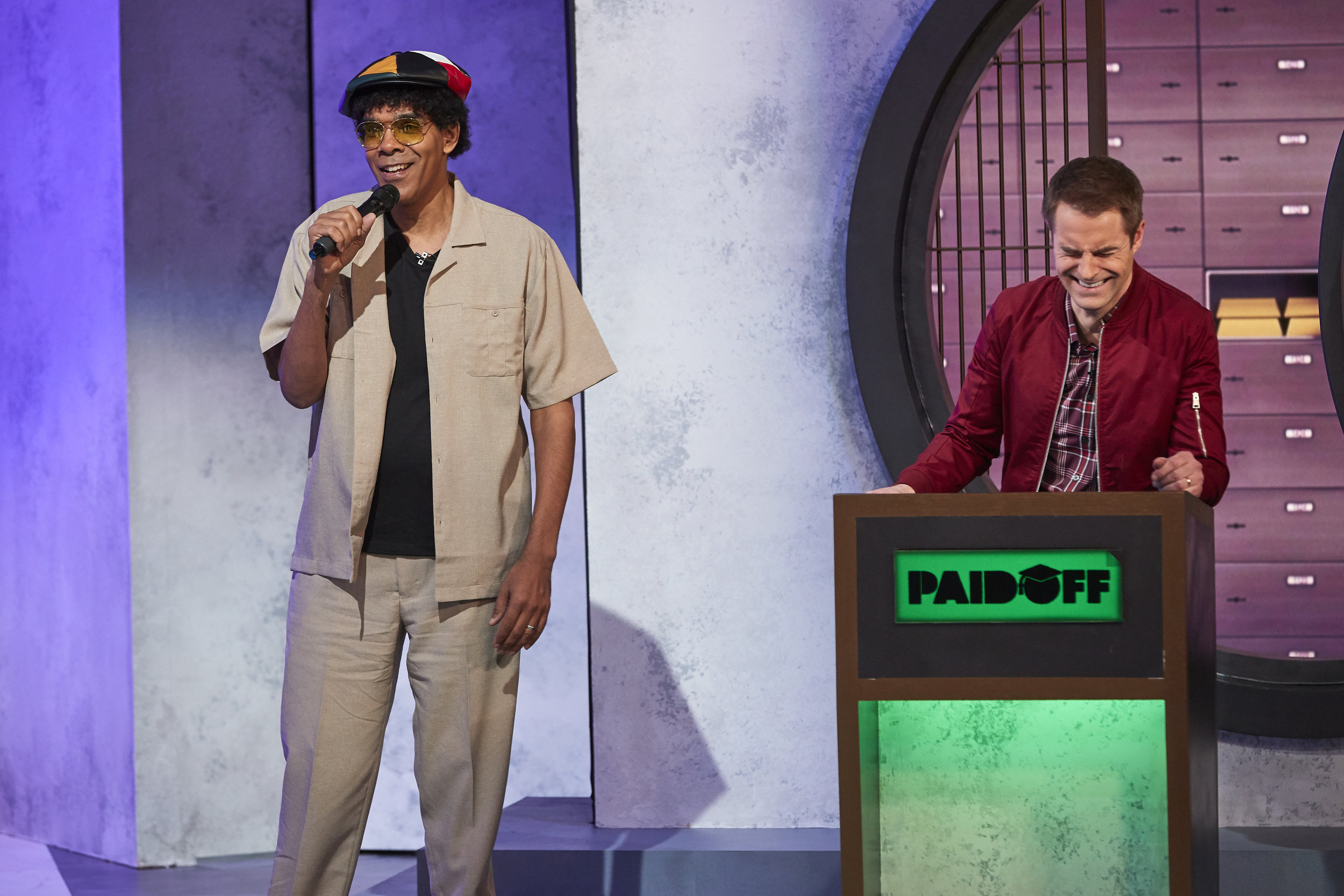 If the show seems short, well, it is, but the remaining time is being used wisely. At the end of the show, the audience gets a chance to play some fun mini games for cash to help with their loans, and Torpey explains in detail more about the student loan crisis in America today, with an aptly named “Super Depressing Fact of the Week,” followed by a loosely related mini-game. This mini-game after-segment is actually really neat, and allows the show to expound more on its deeper mission of educating and informing the public on how obnoxiously pervasive massive student loan debt is in America without it affecting the main flow of the show. You come for the main game, you stay for the extra stuff, which is really clever. The game feels quick because it is, but your entire half hour is filled with games and the comforting realization that you’re not the only one with student loans.

Some technical game show things: the theme song is nondescript but competent. The set’s pseudo-industrial look feels very modern but feels a little cheap, with on-set monitors not hiding the TV brand, but the halftone graphics package is colorful and fun. As a production, it’s well put-together. Michael Torpey keeps the game moving along, and doesn’t feel like he’s pretending to be a game show host. A bit corny with some prompter lines, when he’s off the cards, he seems to genuinely care that over 40 million Americans are saddled with student debt that their parents told them would help them get a good job while simultaneously voting for legislators that passed laws based on horseshit trickle-down economics that haven’t worked before, aren’t working now and will never fucking work ever.

Paid Off, knowingly or otherwise, pulls a lot of inspiration from a lot of different game shows, for better or for worse. Inter-game skits and characters feel a lot like Remote Control. The humorous category names in the first round and follow-up questions in the second round are reminiscent of Win Ben Stein’s Money. The bonus round smacks with flavors of Mastermind or 2-Minute Drill with the ability for a specialist subject. The aforementioned You Don’t Know Jack, Family Feud, and Debt make up some of the roots of Paid Off, in a package that doesn’t feel overly derivative unless you’re a sick obsessed game show fan with thousands of dollars of student debt. 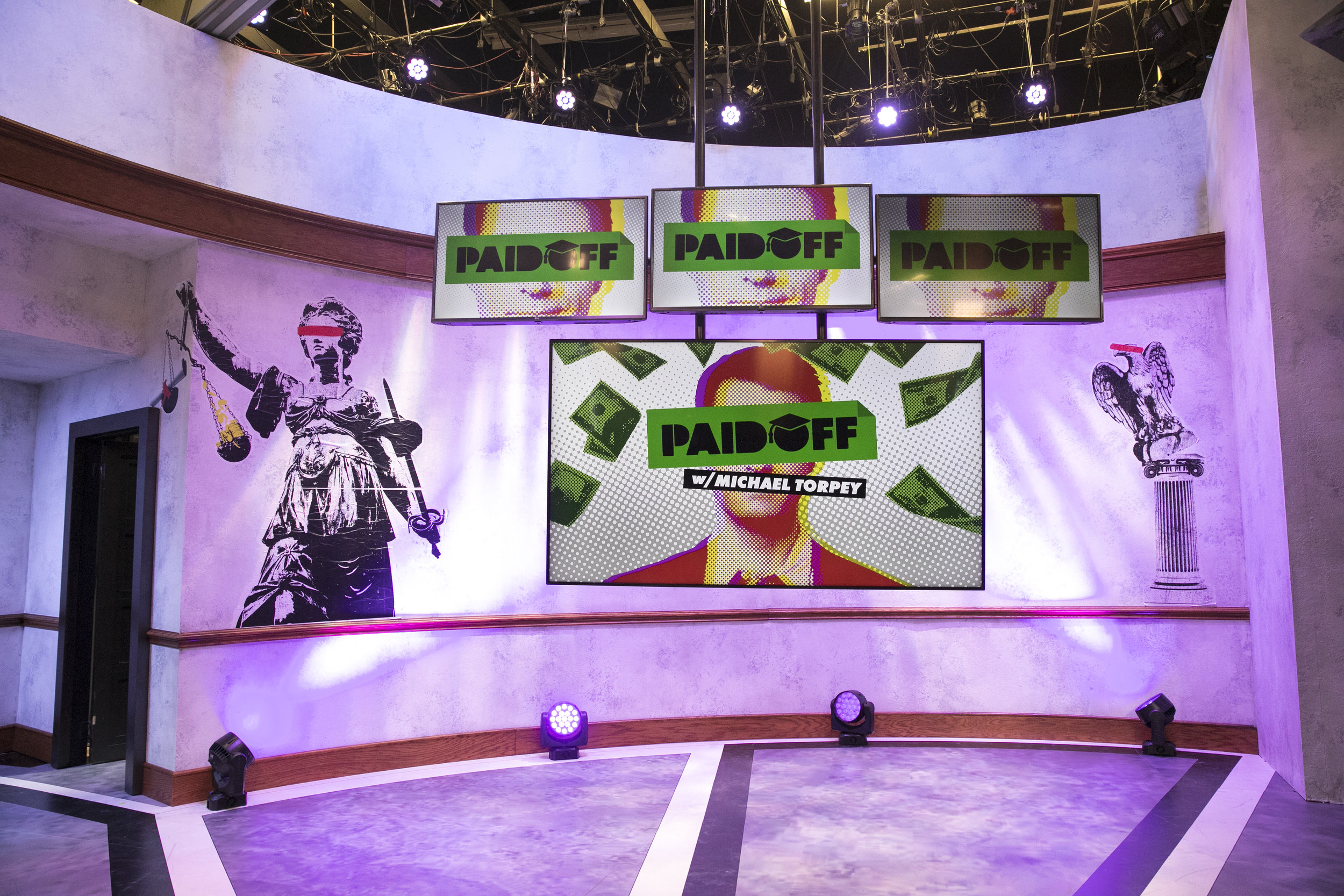 There’s a very specific audience for Paid Off, I think. If you have student loan debt and it’s stopping you from truly living your life, Paid Off is one of those pieces of entertainment that allow you to commiserate with the problem instead of ignoring it, which if you’re into that, you’ll enjoy greatly. If you think that millennials are lazy do-nothings who should just pull themselves up by the bootstraps, work harder and stop buying vape juice, you won’t enjoy this show, partially because you probably don’t enjoy anything ever, and partially because your world view comes into complete conflict with the message of this game show.

Which is a weird thing to say, really: “the message of this game show.” Paid Off is activism via game shows, which deserves props for being unique in its own right, even if the parts of the whole aren’t as unique as I’d hope. At the end of the episode, Michael Torpey calls on the audience to call their representative because “there has to be a better solution than this game show.” But if the solution in the interim is this game show, it’s not a bad game show to have.

A competent if unoriginal game is wrapped in a message that will resonate with its target audience, Paid Off is a light-hearted half hour about a topic that's anything but light-hearted.