Emoji have successfully taken over the ?. From gummy ?s to face masks to even ?s, emojis are everywhere. And until we see ?? on the Family Feud board or ??? for $600, the only place we’re going to see emojis in game shows is on GSN’s newest original game show, Emogenius.

Hosted by YouTube personality (and grandson of The $64,000 Question host Hal March) Hunter March, Emogenius is a light puzzle game show. Two teams of two work through several rounds of puzzles, all of which involve our favorite modern hieroglyphics.

Round one has a very Concentration-type feel to it. The emoji function like little rebuses, and the challenge is soft enough that anyone can get into it, even if they’re useless around smartphones. Round two gives players a category and then three increasingly-obvious clues about what the clue is, like the emoji puzzle below. 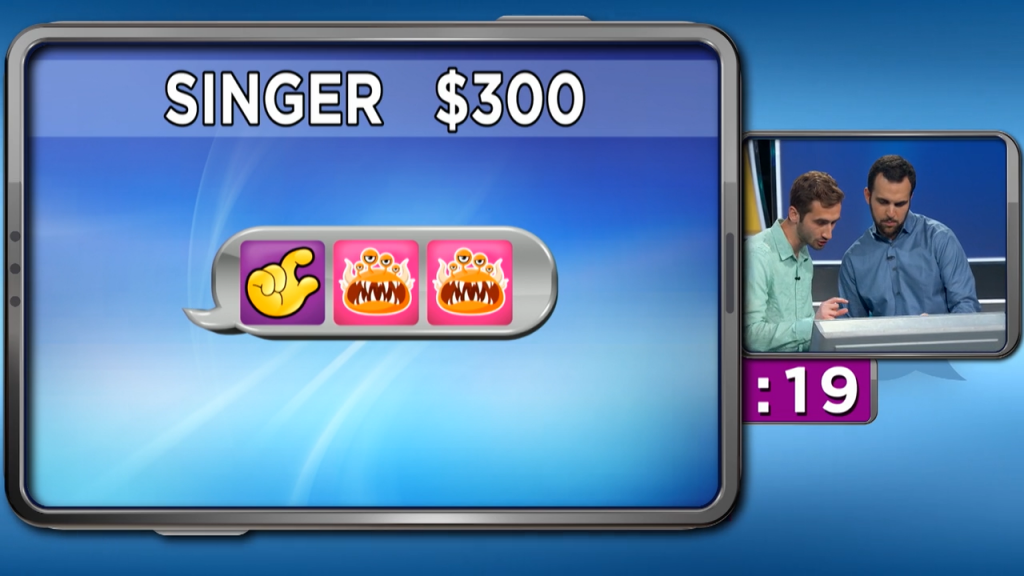 The answer’s Lady Gaga (the emojis are showing “little monsters”). There’s something wrong with that image, but lemme finish with the game.

Round three, teams now are texting each other. Presented with a limited keyboard, a timer and a set of clues, one teammate inputs emojis and the other attempts to figure out what the hell they’re trying to communicate. Not unlike me trying to talk to my little sister through text. Once both teams go, the team with the most money heads off to the bonus round. 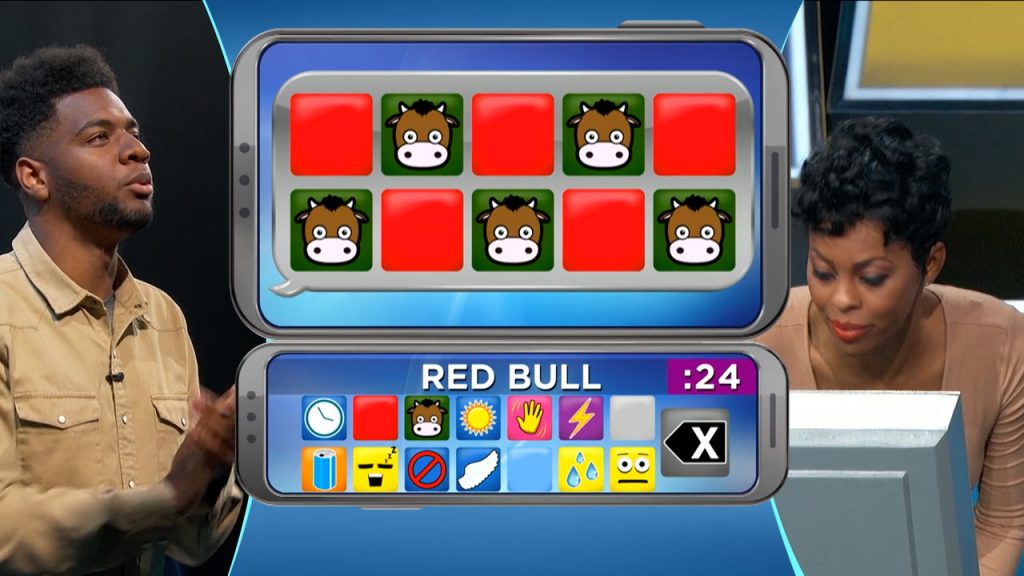 The game is pretty simple, and it’s an enjoyable thirty minutes of television. The payouts are Idiotest-levels of low, the set looks adequate but cheap. Hunter March is an energetic host, and does a good job moving the game along. Unlike Fremantle’s Buzzr online game shows, who dipped into the YouTube sphere to find some of the most annoying game show hosts in the world, March seems to understand how to host (hopefully by studying granddad’s tapes) and move the game along. Casting could have found smarter contestants, at least in the preview episode we were given.

So, here’s my big problem with Emogenius. And it’s not even a real big issue, so if you’re not a huge nerd, you can skip this paragraph. So, going back to the Lady Gaga image above, here’s me, using the full emoji list, trying to recreate those emoji: ????. There’s no emoji for “little” and “monster” generally showcases an alien. The show doesn’t use Unicode standard emoji that everyone’s phone has—instead, it creates ugly fake emoji for the purposes of the game. Hopefully contestants were made aware, because if you’re going into a game about emoji and you’re presented with emoji that can’t/don’t exist on any device, that seems terribly unfair and would definitely shake my confidence.

Outside that incredible pedantry, Emogenius is a pretty decent half hour of puzzle-solving. I had a lot of fun playing along with the puzzles, possibly had more fun than watching the contestants fumble around with relatively easy puzzles. The show’s cheap enough that it could run a few series, and it’d be worth it to watch. And that’s no ??.