Boom blows the other Fox summer game show offerings out of the water.

On the surface, BOOM!, Fox’s latest summer game show offering, looks like it belongs more on Nickelodeon instead of network TV. A giant, cartoonish bomb sits in the middle of the stage, offering a deluge of gunk, gak and yucky stuff sprayed over incorrect contestants.

Well, yeah. BOOM! has that.

But what it also has is fast-paced trivia action with trappings familiar to fans of the Million Pound Drop in the UK. BOOM! is a perfect template for a summer game show: one easy-to-understand gimmick and a solid game behind it.

Every game of BOOM! is played with a team of three contestants, whether they’re friends, family members or some other easily-relatable common bond. The main game has 6 questions, of increasing value, from $5,000 to $50,000. Each question has multiple correct answers, but only one incorrect answer, and each answer is tied to a wire on the bomb. Host Tom Papa (previously of The Marriage Ref) reveals the category, then the team selects a member to play. The more valuable the question, the more answers (and wires to cut) are on the bomb. The player has a limited amount of time (anywhere between 30 and 90 seconds) to snip the wires of the correct answers. Snipping all the correct answers banks the value of the bomb. Snipping the incorrect answer, well… 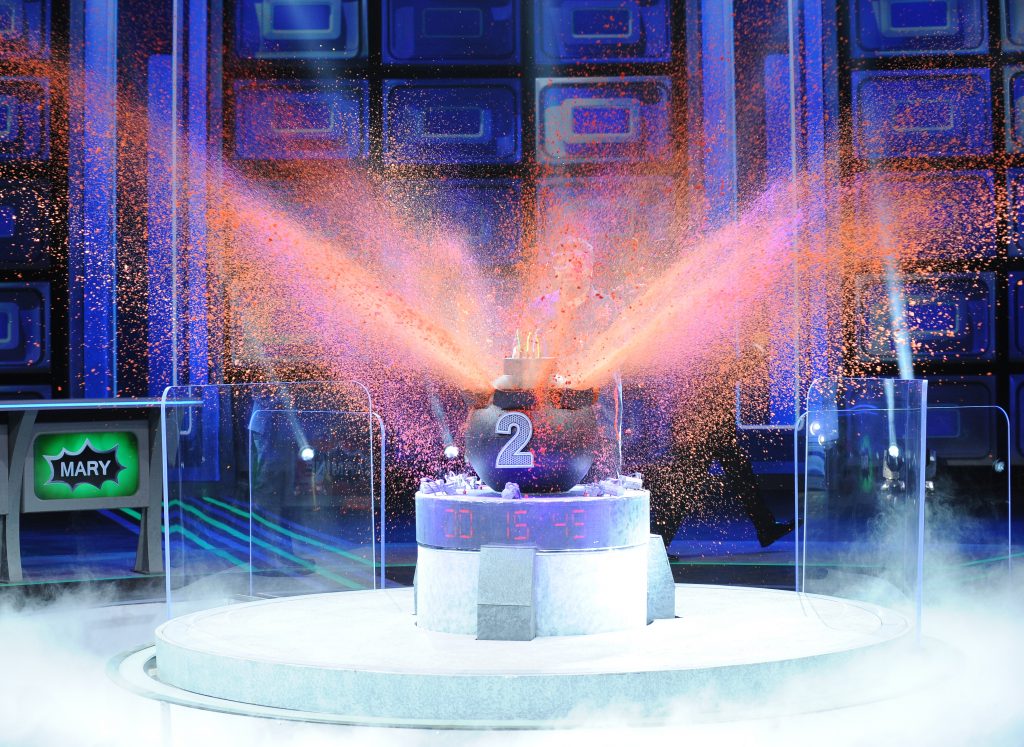 The producers may have partially cast these teams based on the associated gunk they could load into the bombs—one team of pizza shop owners got blasted with pizza and alfredo sauce. Cute.

If a player snips an incorrect answer and has nacho cheese/hair gel/moussaka blasted on them, they’re no longer allowed to play any of the remaining questions. If all three teammates get bombed, the team’s game is over.

However, if the team makes it through all six questions without completely bombing out, they have a chance to quadruple their money with one final question, the Mega Money question, if they choose to play. Choosing to play and succeeding earns the team 4x their bank, while failing leaves them with half their bank. (A consolation prize! In 2015! Praise be to the game show gods.) In the Mega Money question, ten options are given, with seven being correct. It’s a great conclusion to the game—slightly different, involves the whole team, big bucks at stake, minimized risk with the consolation prize. It’s very well thought out.

The trivia presented is actually pretty engaging. The topics are a wide range, and having to give multiple correct answers is a fun twist that isn’t explored very often today. For instance:

Certainly a thinker, especially with only 30 seconds on the clock. The clock moves FAST, by the way. Once a contestant snips a wire, an ominous voice counts down from 3, and then either the bomb explodes or the voice says “correct.” If the answer is correct, the clock immediately starts up again. No time to celebrate. This adds to the stress and immediacy of trying to diffuse the answer. 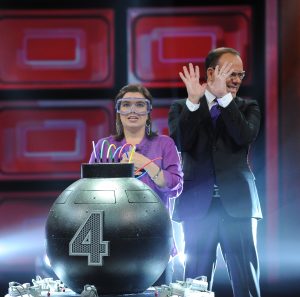 Host Tom Papa does a great job explaining the rules, chit-chatting and riffing on the contestants, and making stupid faces when trying to avoid getting splattered with gunk. The show itself actually never feels like it drags on, which is surprising considering how mind-numbingly slow 5th Grader was when we reviewed it. In the reviewer copy we watched, commercial interruptions happened, but never with any teasing as to what would happen next.

The game itself is solid, and it feels very reminiscent in how Million Pound Drop presents itself: category, possible answers, question, start the clock. The process of a contestant trying to talk out answers while racing against the clock, coupled with the close-ups of the wirecutters hopefully cutting the right wire, and the tension of waiting to see whether the bomb explodes, is executed well. The tension translates well at home–I found myself holding my breath to see if a potentially-dicey answer was correct. Every decision that contestants make on BOOM! has a fulfilling payoff for the audience at home: the excitement of watching someone beat the bomb, or the excitement of watching someone’s mistake cover them with questionable-looking goop. Unlike the other game show offerings this summer, BOOM! doesn’t make a huge deal about the money, until the money’s up for grabs at the end of the game.

BOOM! was actually a lot more interesting than I thought it would be. Most of the production annoyances that pervade modern game shows (announcer spoilers, endless chatter, money money money everywhere it’s all about the money) are minimized here, which makes the whole show far more enjoyable to watch. Tom Papa keeps things the game moving and the production choices keep the show exciting. BOOM! is a definite must-watch this summer, and it premieres Thursday, June 25th at 8 PM, 7 PM Central on FOX.

With such a goofy construct, it's surprising how fast, intriguing and fun BOOM! is. It's definitely worth a watch.