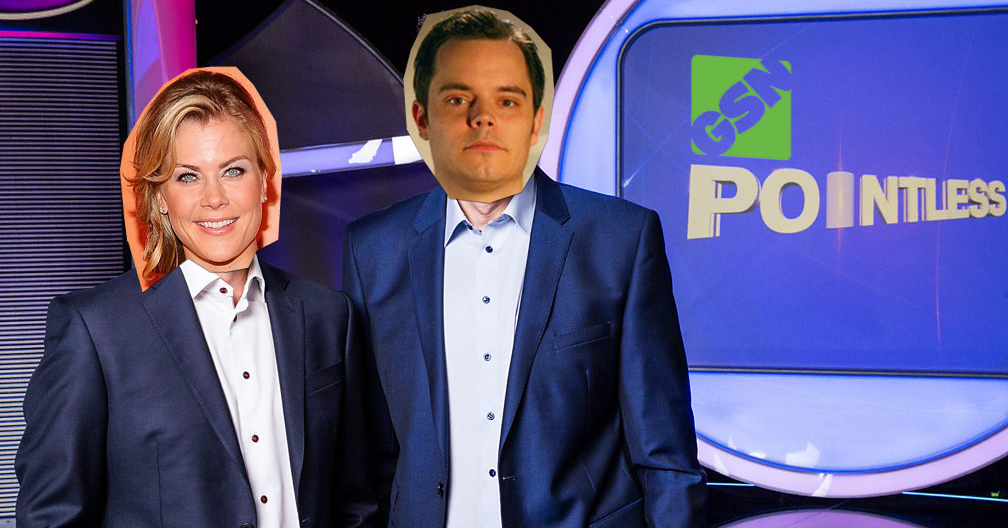 We Watched GSN’s Pointless And Lived To Tell The Tale

After years of hearing rumors, BuzzerBlog has an exclusive overview of the shelved GSN import.

Last night, BuzzerBlog got an anonymous file transfer request for the first episode of GSN’s Pointless. We were told we can watch it internally, but can’t share any video or screenshots. We can talk about all we want, they said, and so for the sake of historic documentation, here is a detailed overview of the GSN’s Pointless.

A Bit of History

GSN’s Pointless was commissioned in March 2017. According to TBI Vision, “Endemol Shine North America’s Authentic Entertainment is working up a US version for GSN” with Lauren Lexton of Authentic Entertainment as Executive Producer. This was ordered alongside a second season of both Divided and Emogenius along with acquiring old episodes of Hollywood Game Night and Cash Cab. The Executive Vice President of Programming and Development at GSN, Amy Introcaso-Davis, commissioned these programs after successes with Idiotest and The Chase. However, the network had a personnel shakeup when president David Goldhill left the company in April 2017. Introcaso-Davis left the company in September of that year, and this episode of Pointless taped in November. Without many champions left at the higher-ups at the network for the show, along with GSN’s pivoting to formats they own outright, it only makes sense for Pointless to get shelved. BuzzerBlog has been able to confirm that only two episodes were filmed, and now we have one of them to review.

The intro is a comically bad, amateurish graphic of a bland “POINTLESS” word mark animated on a sparse blue background. The theme song (along with most of the music cues and sound effects) is the familiar version from the UK. The graphic wipes away and reveals a surprisingly nice, if not cramped, set. The host, Alison Sweeney of Days of Our Lives, walks out from the middle of the set. She is standing on a platform that forms the base of the Pointless tower, the big set piece that counts down the value of each given answer. It is easily 18 feet tall, going above the highest parts of the set and into the lights. A small staircase leading up to the screen forms the bottom 10 coins of the tower stack, so when the digital board empties out, the score’s at 10. The backdrop is a purplish blue and red, while the floor is blue and gold concentric circles emanating out from the bottom of the massive Pointless tower. The same bland “POINTLESS” word mark appears on every monitor on stage.

On the left of the tower are three pairs of teams, and on the right there is a large video board and a man with two laptops sat in front of him. Sitting in the Richard Osman role is Doug Mirabello, who according to his LinkedIn, worked for Authentic Entertainment when the show was commissioned, but by filming was a freelance Development Consultant. Currently he is the head of content at GSN.

Sweeney gives a short introduction: every question was posed to 100 people, who were asked to give as many answers as they could to every question. She then announces that the winning team could walk away with $10,000. Sweeney then introduces the first category: Flavors of Jelly Belly Jelly Beans. Sweeney throws it over to “my trusty co-host” Mirabello who gives more information about the question and provides harmless host-type banter. The first big format change appears here: three teams—today it’s Cary & Tee-Tee, Winston & Franky and Alex & Maddie—compete in this game, instead of four. This makes sense because the show is 21 minutes long and not 45 minutes like in the UK.

The first question doubles as the introduction of the couples. In this first round, the couples work together to answer the question—Cary & Tee Tee say “black licorice”—and then Sweeney turns to the massive Pointless Tower and asks, “Is It Pointless?” That is apparently the tower’s cue to start checking points. Keen viewers of the UK Pointless know that the board decreases at two different rates: A fast rate during the main game, and a slower, more dramatic rate during the final, with accompanying appropriate sound effects. The US Pointless Tower always counts down with the slower, dramatic music, and when the counting stops, the sound effect for a Pointless answer in the UK plays, which for someone who watches the UK version a lot is very confusing.

Once every team gives an answer for the first question, Mirabello goes over some Pointless answers—Cantaloupe, kiwi and pomegranate—and the most popular answers—Orange Sherbet at 47, Lemon Drop at 54 and Very Cherry at 78. They then move to a second, different question and reverse the order of play. Teams still work together. Question 2 is to try to name People With The Most Popular Instagram Accounts. Mirabello lays out the parameters for the question and play continues again. (“Is Logan Paul pointless?” Yes, America screams at their TVs.) In this first round, there’s no red line because no team gets eliminated. The middle team, Winston & Franky, manage to keep their score lower than the other two teams, so halfway through the round, they are deemed the round’s winners and get $500 in their personal banks. The final team to play is reminded that pointless answers give out prize money so they give an answer just to try to get some cash.

Once the show returns from commercial, the next round starts. The scores are wiped clean, and the winning team in this round gets $750. Pointless answers are still worth $250. The teams are given a category—Instruments Used In Country Music as listed on the Country Music Hall of Fame—and then a list of 8 possible answers. Sweeney notes that at least one answer is pointless and one answer is incorrect. The teams just pick an answer off the list and hope for the best. In this round, only one player from the team answers at a time, without conferring with their teammate. Once all three players give an answer and get their points, the teams switch off for a different question. The infamous Red Line indicating the point value to get through to the Head to Head now appears. The team with the highest score in this round is eliminated, while the team with the lowest score gets the $750.

The Head to Head probably has the most changes. Instead of playing a best out of three, the teams play two questions, and the lowest score moves on to the Final and banks $1,000. Teams lock in their answers simultaneously on a Final Jeopardy-style light pen setup. In this game, when tasked with naming one of the “For Sale” Categories on Craigslist, both teams locked in “free” and got the same amount of points.

The team that makes it to the Final round keeps whatever money they earned in the main game, presumably to split between them. The team is then presented with two categories—in this episode, TV and Royalty. They select one and are given a question in the category. The team then can submit one answer for every round they won, so a team that squeaks through by just winning the Head to Head gets to submit one answer, while a dominating team can submit three answers. This team won two rounds, so they submit two answers. If any answer was Pointless, the team would win the $10,000 jackpot.

I can completely understand why GSN ordered this show. It feels like a mix between Idiotest‘s easy play-along factor along with being another UK import with which GSN had a lot of success with (The Chase, Divided). Watching with fresh eyes, the trivia topics they used weren’t that engaging to watch and play along with. The prize structure was kind of confusing and the Head to Head was completely broken and didn’t feel great. If this were placed in GSN’s lineup today as-is, it would definitely be better than Get a Clue and Common Knowledge. For the amount of effort that needs to go into writing a show like Pointless along with the format fees, it’s not surprising that GSN shelved the effort. About half a year later, Endemol brought Pointless to Australia with a format closer to the UK production condensed into a 23 minute production. That show failed due to low ratings after a season as well. Pointless might be one of those uniquely-British formats (like Taskmaster or Countdown) that only have a niche International appeal and don’t work in America.

We’ll continue to dig and figure out more about why this show got this far and no farther, so keep an eye out for more information. 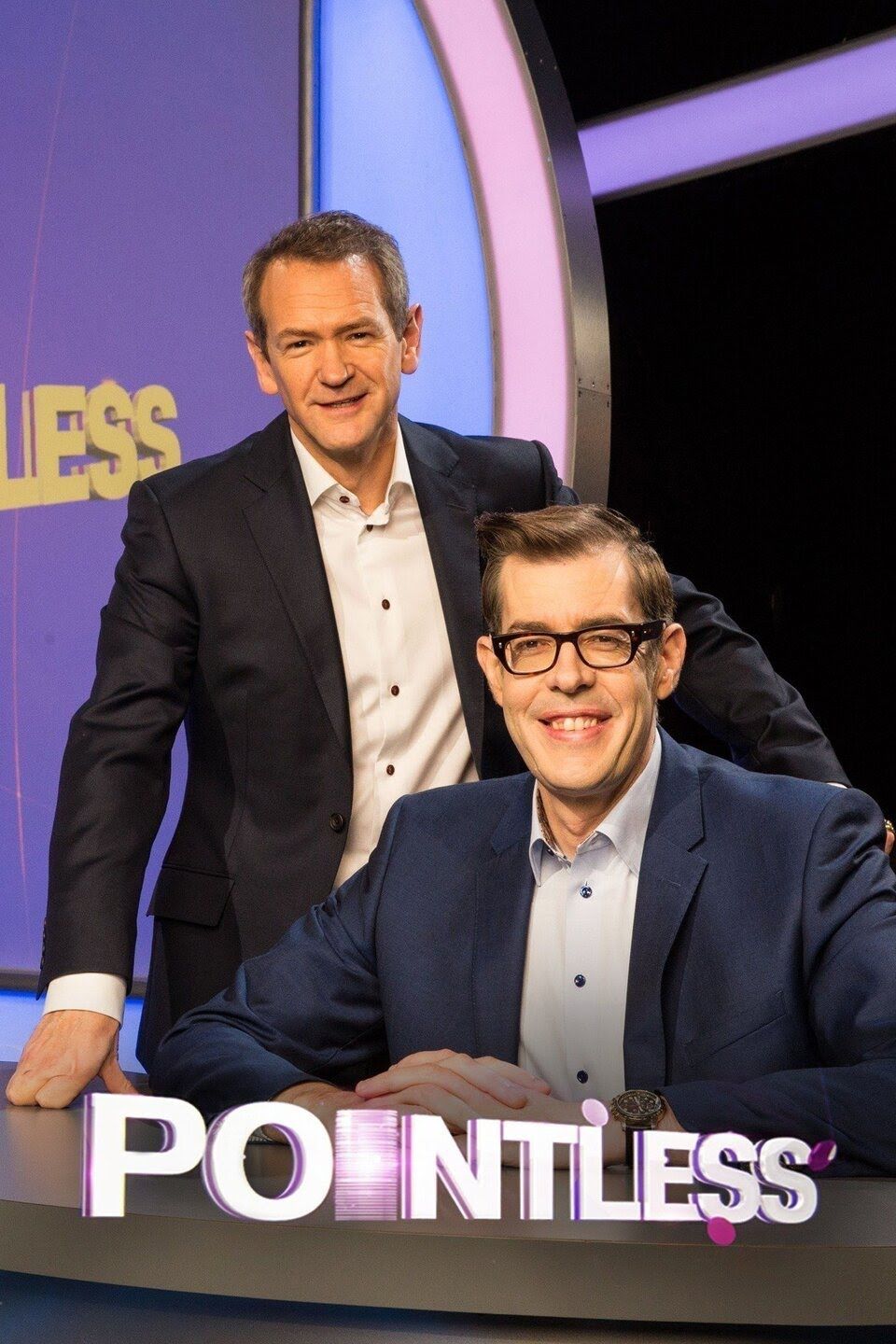