The Real co-host talks to Cory about her new role on TBS’s The Joker’s Wild.

The Joker’s Wild is coming to TBS thanks to rapper Snoop Dogg, who is producing and hosting the show. Jeannie Mai of The Real is his co-host. She took some time to give Cory the inside scoop on her history with game shows and what fans can look forward to with this revival of a game show classic. 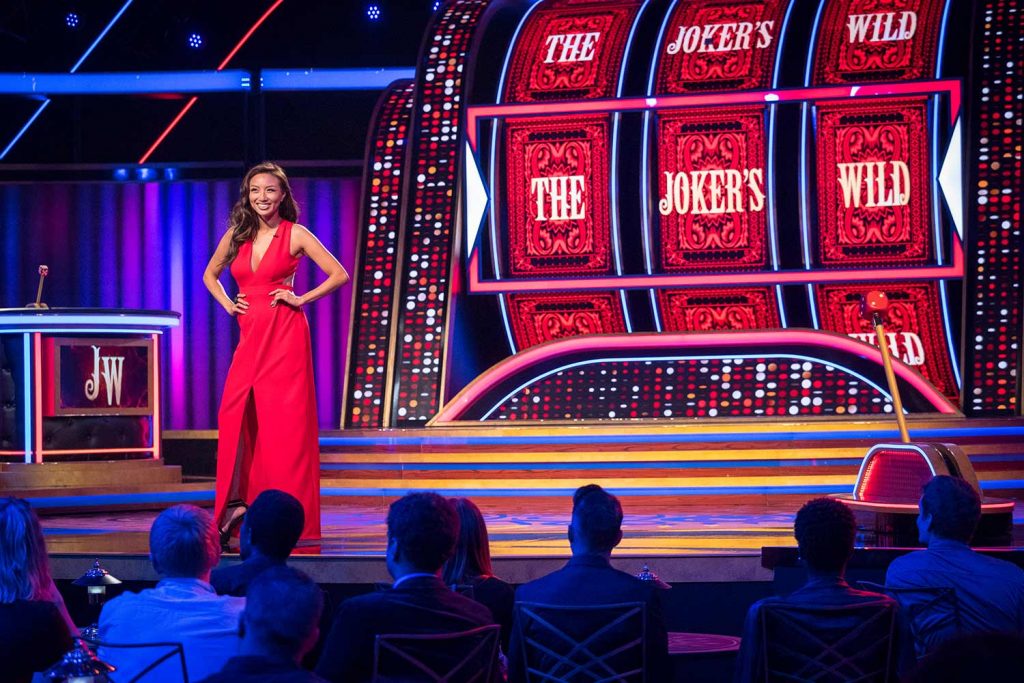 Hi, Cory, how are you doing? Thank you for taking this time!

Absolutely; thank you for joining us. We’re really excited here at BuzzerBlog about The Joker’s Wild.

Yes! It’s going to be so cool.

Also, it’s really cool to talk to a fellow Asian-American who’s in the entertainment industry.

Filipino! I give all my love to my Pinoys out there.

Aww, thank you! It’s really cool to talk to you. Let’s start all the way back at the beginning. What was your exposure to game shows growing up?

Oh my God. I think game shows was the whole way that my parents learned how to speak English. My mom—no, it’s crazy. So, The Joker’s Wild started to teeter off right around when I was four or five, so we used to record all the shows. They would play it all the time, later on, for my family members. My mom and dad sponsored the rest of my family over from Vietnam when I was younger, so all we would do was watch tapes of The Joker’s Wild, Family Feud, even Jeopardy!. I have a lot of smart uncles and aunts, and they were the ones that were always intrigued by those shows, where I was a little bit more into Family Feud, and $10,000 Pyramid.

Game shows—games, period—are really big in my family. Every holiday, every time we get together, we’re either playing Cranium or, some type of Taboo, or even from my other show The Real has a game called ShoutRageous; we play that together. It’s a lot of fun. It’s a way to connect, and, like, call each other out and school each other a little bit once in a while. The family that shades together slays together, I think.

That’s awesome! So, this isn’t your first dip into the game show world. You’re frequently a panelist on Hip Hop Squares…

And you hosted SteamPunk’d on GSN…

So, what will your role be on The Joker’s Wild?

First of all, I love games because it’s such a fun way to see people outside their element, you know? Especially with adults, we’re always so busy trying to act cool, and trying to figure out life, get our bills paid. Games allow for any age to just channel that inner kid, you know? And especially with Snoop—Snoop is so freaking fun, man! 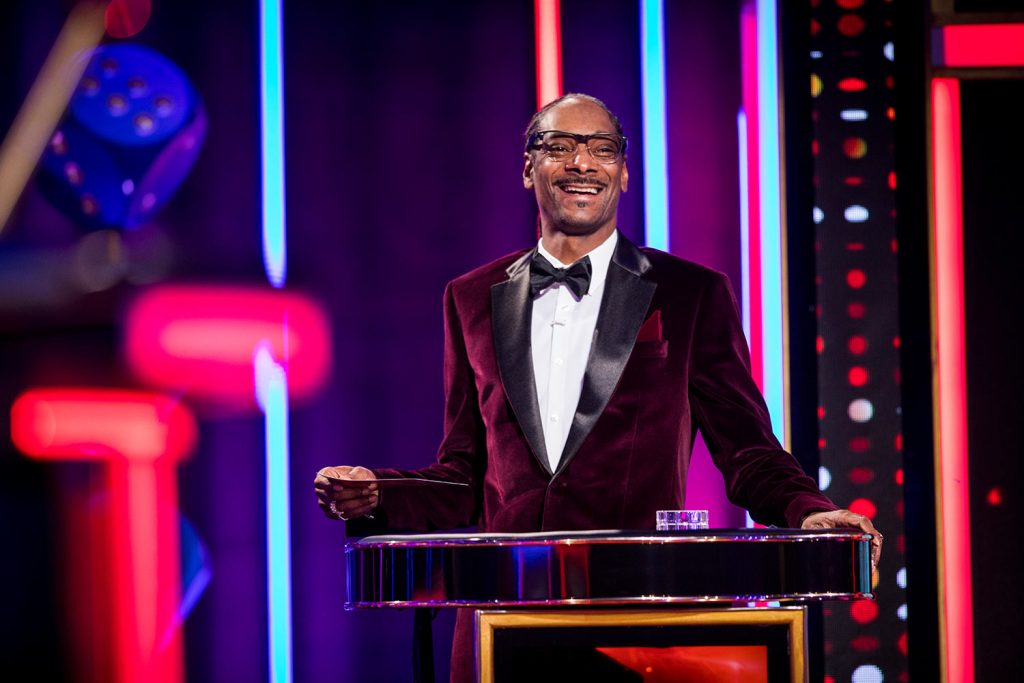 Yeah, he’s my all-time dance partner. Any beat that drops, he’s gotta dance to it. He’s got like 50,000 different dance styles to every single beat you can think of, and he’s The Human Jukebox: he knows every song, every lyric. So, he and I together, I’m surprised we weren’t on a dance show because all we did was dance and give away fat money.

So, I’m Snoop’s Lady Luck, and what Lady Luck is there to do is to basically bring everybody good luck, because I want people to win. We have up to $25,000 at stake, you know? And we gave away many grand prizes. I feel like I did a damn good job.

Four words: Snoop. Dogg. And. Me. [laughter] Snoop Dogg, first of all.

Snoop is, yo—you’re not ready. I love Snoop. I’m a west coast girl. I grew up loving the D-O-double-G from day one, like everybody in this world. There’s not one person who isn’t a fan of Snoop. But, I was not ready, man! He had me shook. Like, he’s so funny, he loves people, he’s just mad quick, too. We had lines, obviously, to read, because there’s so many rules to the game and stuff, but the way he can just go off-script and just, like, go back and forth—literally, like he’s freestyling with people about their story and where they’re from, that was so fun. That’s my favorite part of the show.

Number two: I think all the categories are interesting. You basically just have to love Snoop or just know what’s up. You gotta be woke to understand the game. We’re not asking questions that you wish you paid a little more attention in school. But you’re definitely gonna wish you paid a little more attention to your Instagram scrolling, that you know Snoop better than you think you know now—it’s all questions that are just fun, man! He came up with all the categories and all the topics—I was rolling the entire time. 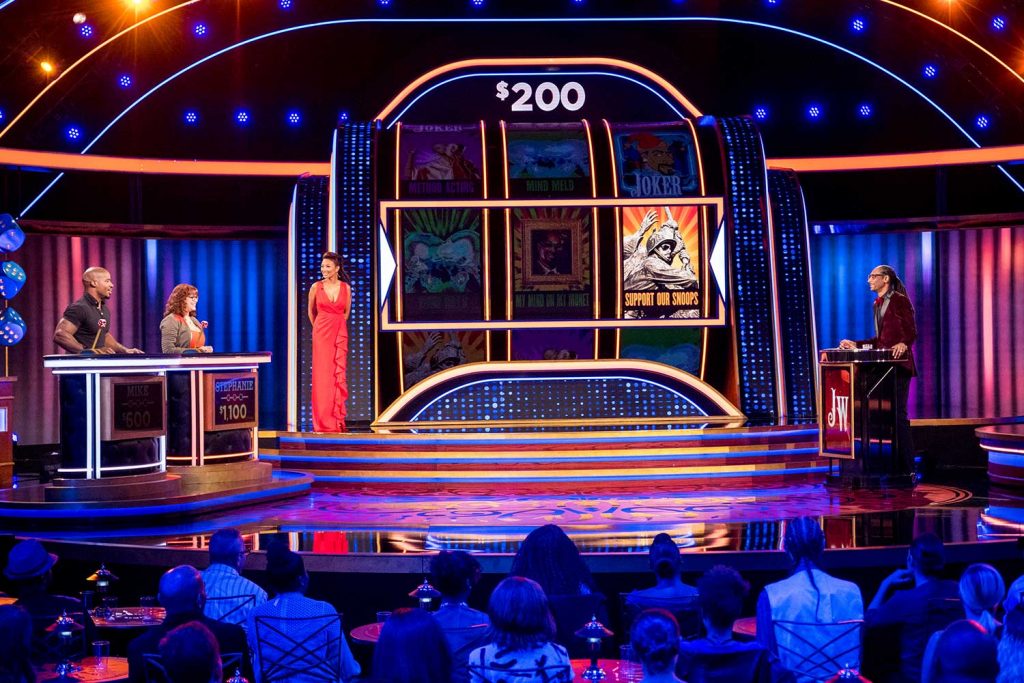 There’s one category that basically you have to guess what past celebrities that Snoop has gone to school with, and some of those knocked the hell outta me. There was Cameron Diaz that I was like, “what?!” And he has a lot of celebrity friends, too, off course.  He had Wiz Khalifa, Method Man—God, there’s a lot of people on this show!

We’re not trying to make the show the way it was before. This is Snoop’s version. This is Snoop reviving a show that nobody would have brought back, nobody has even talked about. We haven’t even thought about it in the last ten years. Snoop, this is a childhood favorite of his. He used to watch this show when he was being babysat by his grandmother, and they would watch this show together. So this was his dream to bring back, working with Sony and TBS, he brought this show back and he brought it in a way that is relevant to us. No, it’s not going to be like back in the day, but it’s not supposed to be. It’s Snoop’s version, 2.0, go ahead, grab a joint, grab your friends, grab a pizza, kick back and enjoy yourself.

Other than the dancing, what’s the most surprising thing you learned about Snoop?

How much he cares about other people. He really cares. Like, there were times when somebody answered a question, and it was slightly off, you know—in a game show, there’s a lot of rules applying and you have to answer things exactly right. We can’t bend, it’s not like your game shows at home. You gotta play by the rules, there are lawyers there, and everything. But he really wanted people to win. He would legit get mad. He would be like, “No, we gotta give that person a point! It’s OK! It’s close enough!” And I love that about him, because he really wanted people to walk away having some type of, like, “ahh, I made it.” Walk away feeling a winner. Every single person, even if they didn’t win, he hooked them up with a big-ass fat prize bag, and he’d even give them extra wads of cash if he could. It was really dope. 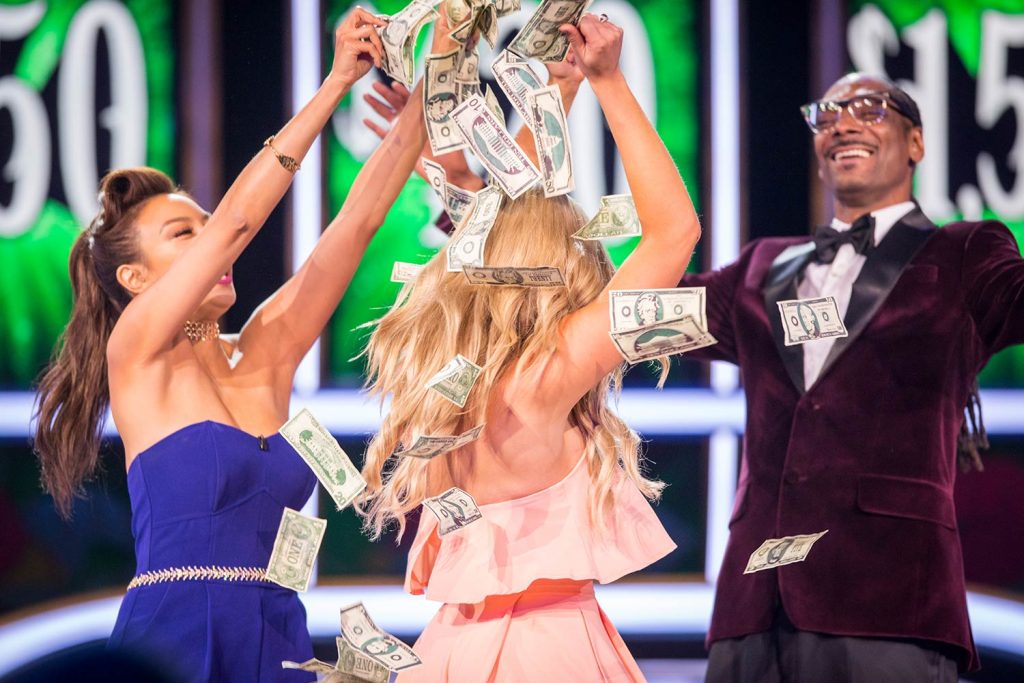 A lot of the contestants had things they had to pay off. There was one girl who lived in LA as a student who didn’t have a car, which I thought was unbelievable—you know, living in LA, without a car. There was another one who wanted to pay off her student bills, another one that wanted to open up her own organization supporting students in art—it was dope.

Blunts, for me. I think it’s prettier and I have my pinky out, you know?

Yeah, you gotta keep it like a lady. Lady Luck would only keep it real dainty.

If you could be a contestant on any other game show, what would it be?

I really wanna be a contestant on our own show, because the categories change every single time we played…

I would’ve torn that shit up. There were some moments were I was ready to take the contestants, man. I was ready to molly wop somebody, like “What? How could you get that wrong?!” But, if it had to be another show, it would be Drop the Mic, for sure. Method Man has his show coming on, Drop the Mic. I happen to be a legit rapper, I’d like to say as a girl coming from The Bay. Yeah, I could school a couple people or two.

This is your direct line to the ultimate, game show fans of the Internet. Give them your strongest pitch—why should they tune in to The Joker’s Wild?

You should tune in to The Joker’s Wild because Snoop Dogg is gonna make you feel higher than life. 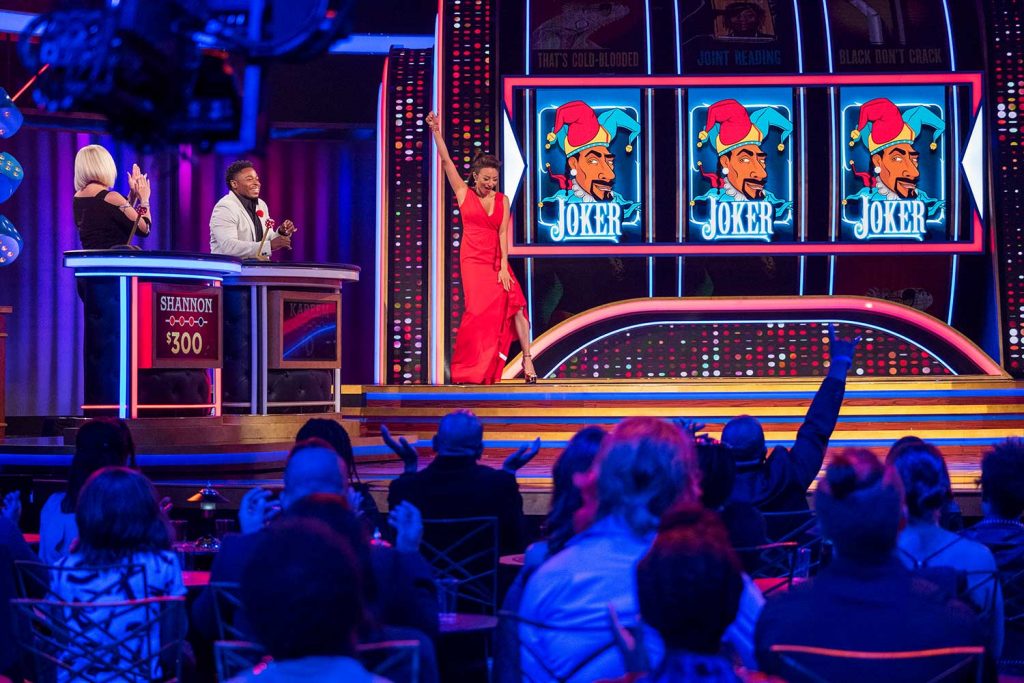 Nice! Considering this will be the first exposure to drugs that most of these people are going to have, I’m excited for them.

We just had this topic on The Real, by the way, about Asian-Americans in entertainment and you would be proud to know, we had three Asians on our show in one season, which I was so proud of, because for some reason, a lot of the game show world, like, you hear that Asians aren’t as expressive or excitable—bullshit! Our first opening episode has an Asian brother and he kills it!

That’s why they put me on The Chase.

Thank you! Hey, it was really great to talk to you. This is awesome. We’re really excited.

The Joker’s Wild premieres Tuesday. Look for a full review on Monday.