The comedian and co-star of the hit panel show Taskmaster answers a few of our questions.

If you haven’t seen the UK panel show Taskmaster yet, you are missing out on what is arguably the funniest show on television. Every series, five comedians compete in a series of weird tasks that test their creativity, ingenuity and mettle. Hosted by former teacher and comedian Greg Davies, Taskmaster’s creator and co-host is the unassuming Alex Horne.

Taskmaster started as a Edinburgh Festival show in 2010, when Alex Horne gave a bunch of comedians covert tasks and gave them a year to accomplish them. It morphed into a television show where it’s given comedy channel Dave one of its biggest hits ever. The show, complete with Alex Horne, has been purchased to series by Comedy Central with comedian Reggie Watts as the Taskmaster, starting sometime in 2017. We’ve given some questions to Alex Horne and he’s kindly given us some answers.

Taskmaster seems like QI, in that no matter what style or type of personalities get casted, it seems like the show is entertaining. What’s the process for choosing people for the show?

The process is fairly simple; we (Andy (the producer), Andy (the director) and I) write down a list of the people we find the funniest. These are the people we want to write our tasks for. We then whittle down this list to the right number, trying to make sure there is a reasonable balance of things like genders and backgrounds and allergies but mainly trying to get the funniest possible combination of people. We run this by the channel, they make a couple of suggestions and we start approaching people. That’s a long and boring answer. The short one is this, we try to choose funny people.

Who would you like to see take on Taskmaster that you haven’t had a chance to cast yet?

I would love to see Jo Brand, Richard Ayoade and Louis Theroux do the tasks.

From this side of the screen, it looks like with the most memorable tasks, there’s always a unique hurdle to get through, either by giving the contestants either too much freedom or not enough freedom. What makes a good task? What’s the process for pitching tasks, and where does the task-making team get its inspiration from?

From my side of the screen, I’ve not really thought about this as forensically as perhaps I should. I like to feel a good task. As in, a good task just feels right. But yes, the amount of rope we give them is pretty crucial. We need to give them some boundaries and sometimes that gives them loads of room to roam in, and sometimes just a tiny area to wriggle in. For me, the essential thing about a good task is that it enables variety and imagination.

In terms of pitching tasks; everyone is very welcome and, hopefully, encouraged to do so. It does end up with me coming up with the majority but all these are tweaked by the Andys, and others—and there are plenty of tasks that have come from people other than me. Finally, I can only speak for myself, and I can’t really say where the inspiration comes from. Task ideas strike me when I’m least expecting them! (although, I should also say that I do often think of them whilst filming others—I suppose that when you’re in the middle of a thing you’re already thinking in that way so have a slightly clearer vision… or something).

Hello! So, “marketable” isn’t a word I’m massively comfortable with but I’m trying to be more of a grown up so… yes! Just about! Maybe! I agree that that show in particular showed that the people doing the tasks didn’t have to be famous or comedians or even performers. They were, however, chosen because we thought they would take part with good spirit both in the Taskmaster house and on the stage. My gut feeling is that non-comedy types would work, but it does help if the people involved have something in common either with each other, or with the audience at home (so, what I’m saying is, I would sooner see some sort of celebrity version than a public version – but I’m neither massively keen or averse to either. I like it the way it is!).

Have there been any tasks that didn’t make it onto the show?

There have. Not many, but a few. The one that nearly made it the most times (and has, I think, made it into the Swedish version) is this: they walk into a room to find a 5 metre roll of bubble wrap. The task says: “Burst all the Bubbles. Fastest wins. Your time starts when you burst your first bubble”. Unfortunately we’ve learnt the hard way that despite all your best plans, pretty much the only way to safely burst all those bubbles is to jump on them for just over half an hour. And when five people do that, you don’t necessarily have an entertaining TV show.

Has there been a task where no one completed the task the way you thought anyone would/could?

Yes, absolutely, quite a few. For example, the one where they had to get to the microwave in as few steps as possible; I presumed they’d make me carry them on my back, or they might try to slip and slide their way there. I did not expect to do rolly polys, cartwheels, crawls and, worst, giant steps.

I am on record as saying “Taskmaster should never be remade in the US because I think there’s a British sensibility to the proceedings that won’t carry” but I quickly reconsidered when I saw how many people from the original UK production were involved. How will my fears be assuaged with the upcoming Comedy Central version of the show?

You’re going to have to trust me on this. You don’t have to fear. Or at least not too much. Andy (the director) and I have already done a load of filming over there. Tom (the editor) is also across everything. It’s going to be fine. In fact, having seen the Americans tackle their tasks, I can say (with some relief) that it’s going to be largely the same, especially sensibility-wise. It turns out that they are just people too, and when faced with a Task, seen for the very first time with a clock ticking and a crew filming, they behave in a funny, stupid and very human way. Thankfully, Comedy Central have let us set up and do the tasks in exactly the same way as here. It’s going to be fun.

Alex, set us a task. We will genuinely tape the proceedings and have you judge us.

Watch the video above first before reading our judgement!

So, here is my judgment – on behalf of Greg [Davies, host of Taskmaster].

Bob: incredible that you thought you might be able to move a chair with your own breath. Good at maths, bad at actual life. You finally went for a strainer, something that famously has holes in, meaning your breath would go straight through. Unbelievable. Also, obviously, you absolutely should have blown the cat off the desk.

Christian: now then. You had some good ideas, and an excellent beard. Your technique was there but your theory wasn’t. YOU were over-ambitious (unlike Bob who was simply incompetent). If you had a bigger and better apartment it might just have worked. So for the future it’s simply a matter of earning a little more money, improving your home situation and buying a taller desk so creating more room in which to blow an inflatable mattress off your desk.

Special thanks to Taskmaster Series Producer Andy Cartwright for agreeing to do this interview and to rope Alex in to answer the questions. Taskmaster airs Tuesdays on Dave in the UK, and is coming soon to Comedy Central in the US. 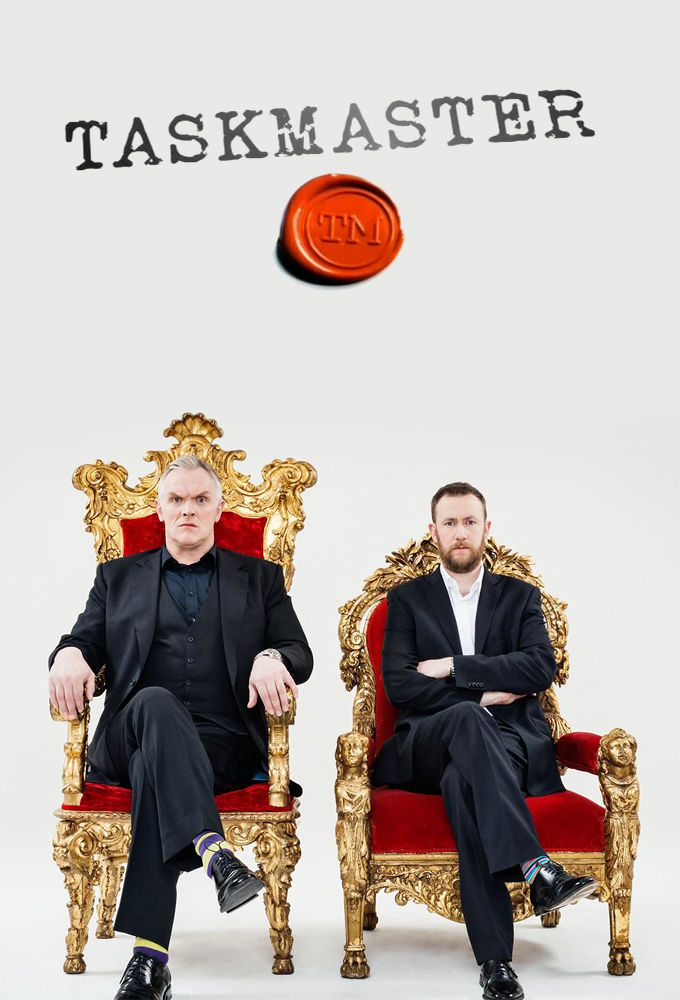