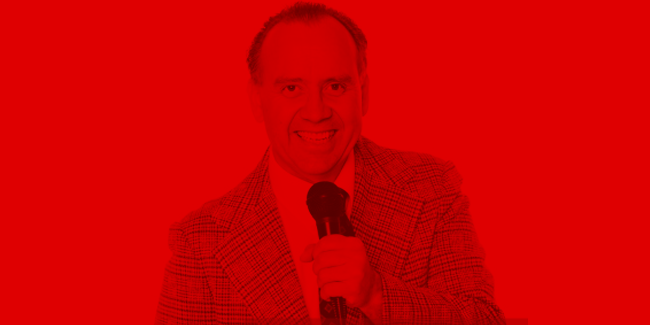 The host of the long-running radio and television quiz Who Can Say comes out of seclusion for an exclusive interview.

For more than 15 years, Burt Granderson hosted the iconic quiz Who Can Say, first on radio, then on television. In spite of its longevity, the show has mostly been lost in time, with all copies wiped per network policy. I talked with Granderson about the show, his understated legacy in the history of game shows and why no one remembers the game.

Thanks for speaking with me today, Burt.

Not a problem, Cory.

So, very little is written about Who Can Say. Can you tell us how the show worked?

Who Can Say was a very popular quiz show. There was a celebrity panel, you know, the greats like Chi-Chi Dunnings, Elayne Waterman, Marcus Curtis Bonko, and there’d be a contestant, and it was great. We ran for four seasons on the DuMont radio system and then we were picked up on the American Televised Network System for, I think first it was 85 episodes, but then we were renewed for another 344 and that was the first year. There wasn’t anything on television except good ol’ Spanks the Clown doing magic and the Tramp Seagull Orchestra playing some classic contemporary modern classics from the old Vitrola days but we were the first to really make the pictures shine. Shine, I tell you.

So how did the game work?

I remember once we had Clark van Sneebs on our show, you remember Clark van Sneebs, right? He was a huge talkies star, was in all the papers. Did you know that after he divorced his third wife, he actually lost his 5-year-old daughter in Yellowstone National Park? I tell you, it was all over the papers. Van Sneebs couldn’t work in this town ever again. It’s a shame what these celebrities have to go through. You look at the papers and the tabloids and all the paparazzi now and they just don’t have anywhere to go, it’s insane!

But back in my day, people used to respect us radio folks, because we told them what was going on in the War. Nobody knew what was going on in the War, with those crazy Krauts giving everyone what for. But that’s why ol’ Burt Granderson was the most Trusted Name in News. You know, I remember once Waltman Clonkers came up to me and he asked me, “Burt, how can you get on the radio every night and tell the nation about Albert Hitlam and all those Jews?” And I told him, “Clonkerman, you gotta lift yourself up by your honches and give ’em what for because if the people don’t know what for, they’re gonna give you what for.”

I don’t really under…

It was a crazy time, but after the War, we had to get the country laughing and thinking again.

Colin, Who Can Say was an American institution. Manny Liebowitz, who was the greatest games man in New York at the time, came up to me after a night at Flarman’s Steakhouse, he says, “Granderson, I’ve got a great idea for a new radio show. You’re going to take the helm and we’re going to give America what for again, right in their brain sacks.”

So, how did contestants pl…

The contestants! You gotta have contestants. Every show, from The Secret Price to To Tell Your Mother-In-Law had contestants. I remember once there was this broad straight from 74th Avenue, and she waltzed into the studio with a big fur coat and a short short skirt and she walked right up to our producer Mickey O’Toolagan and she said to him, she said, right to his face, she said, you won’t believe this, she walked right up to him and, get ready for this, Christopher, she said…

Hey, come on Caleb, calm down, I’m in the middle of a story. So, she says to him, she says, “Which way to makeup?” [uproarious laughter] You wouldn’t believe the kind of contestants we’d drag out of the gutters to play our game. And the game was so easy…

[frantically] How, how, how? How did the game work?

Oh, it was so simple! So, we got two players and a celebrity panel. Then, we used to ask them really raunchy questions with blanks in them. Then the celebrities would fill in the blank with some funny answers. If the contestants matched what the panel said, they’d get a point, and whoever got six points would play a bonus game.

Wow, that’s amazing, because that sounds exactly like the Match Game.

Oh, you know about those two-bit hacks? That Greg Raybuck and those thieves at Matt Grayson Bob Tillman? Yeah, those sons-of-bitches were always taking our ideas. I’m telling you, we had all the greatest shows. I remember we were working on a game show where we would give the answers to the contestants but they’d have to give us the question! Then that Marv Graxton talked to his wife about the game on the plane and now we have a Canadian on our television reading out African countries and it’s a travesty.

Do you mean Jeopardy!

The entire entertainment industry is in jeopardy, Christian.

It’s Cory. And what do you mean by that?

You’ve got people eating bugs on TV, and have you seen The Right Price is A Deal? There’s so many colors! And they’ve got that guy from Where’s The Line as the host, and he’s not fat anymore. I miss the good old days when Bob Blanker and Rob Ronnie would tell people to Get Over Here and play a Pricing Puzzle. And when Roderick Donzowitz would set up the games, you’d know everyone was excited for a good old time. Now, you’ve got some young hotshot with his fancy editing cameras and star wipes and it gets my blood boiling.

I, um… I think I might be over my head here.

And why does the American Broadcast System think they can re-make good ol’ Dirk Clank’s Thousand Dollar Triangle? At the peak of television, if you were giving away a thousand dollars, you were changing lives. On my show, we gave away a lot of thousands of dollars and now you’ve got a man who takes women and gives them flowers right after football and you’re making him ask people if they want to be millionaires? Why not billionaires or trillionaires? You think I’m made of money? You’ll have to take my money from my cold dead hands, you pinko commie scum.

One last question: who are you voting for in the upcoming election?

Thanks for your time.