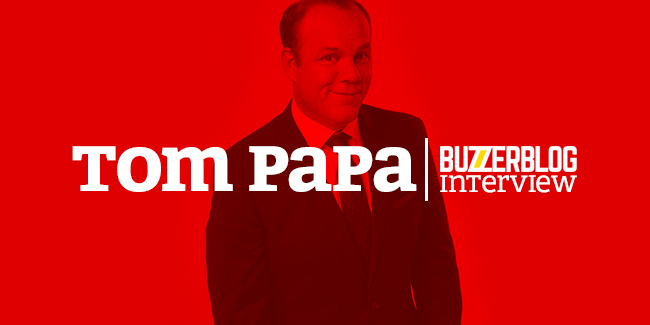 The BOOM! host talks about being an emcee, Treasure Hunt, and chunky mustard.

Tom Papa is the host of BOOM! on Fox and Duck Quacks Don’t Echo on Nat Geo. He sat down with me today to talk about BOOM!, game shows, and pie.

Thank you for sitting down and talking with us here at Buzzerblog. We really like BOOM!. Like, a lot.

So, it’s nice to talk to the man who makes the greatest faces in the world trying to avoid getting his suit messy, so thank you for that.

What’s going through your mind when someone’s answering a question up on BOOM!? Do you know what the answer is beforehand so you can duck out of the way or are you in the dark like everyone else?

Sometimes, it’s a little obvious. I’m a little more calm and can see things a little more clearly because I don’t have as much at stake, and there’s been times when the answer was really obvious, and they even had it when they were talking it through, and you think that they have it right but then you see them reaching out and clipping the wrong wire!

That’s the thing—it’s not just answering the question. You have to realize what you’re doing. Sometimes, people spazz out. If I see that and it’s obvious to me, no matter how much I like them, I’m taking off. 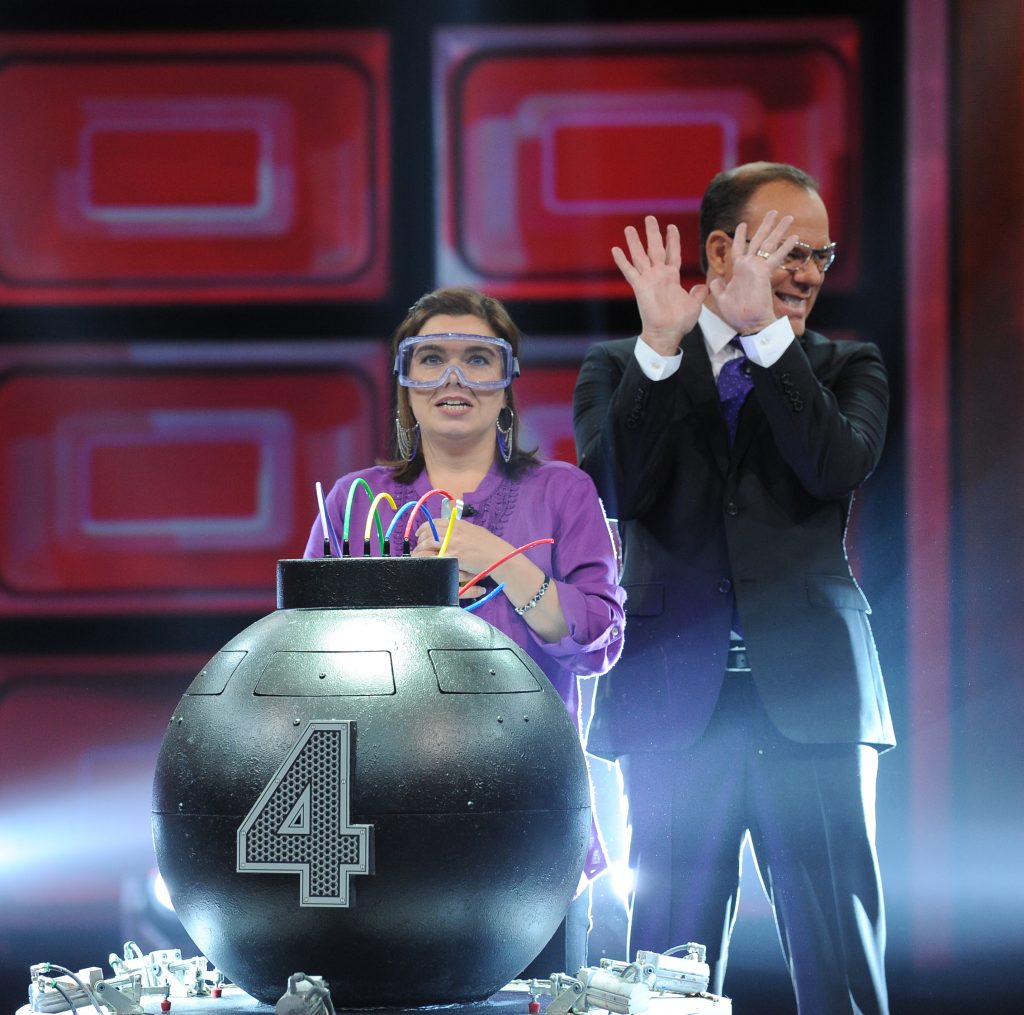 [laughter] We’ve over-analyzed this game immensely, because we’re game show nerds, that’s what we do. We’ve come to the conclusion that this is way harder than most other game shows because there’s this cognitive dissonance between knowing the answer and then tangibly linking it to a color and then snipping a wire and then there’s time and then there’s people. I can imagine that the pressure gets to a lot of people and people make weird mistakes sometimes.

Yeah, exactly. I mean, they don’t spazz out that often, but there are a couple times where there’s a dude that’s like covered in goo, and they’re just looking at me in shock, like, “What did I do? I had the right answer!” Yeah, but you clipped the wrong wire! You were saying it out loud and you nailed it. But yeah, it’s intense. People have to be as cool as possible because you’re right, a lot of things are going on at once. It’s kind of intimidating, when you’re standing in front of that big, Wile E. Coyote bomb, knowing that it can go off. It’s like someone standing there with a pail of water while you’re trying to have a conversation, and you know they could pour it in your face at any minute. It’s going to put you a little on edge.

You’ve said that like that happens a lot to you in your life.

[laughter] That’s how we do the practice shows.

This isn’t your first emcee role. You do Duck Quacks Don’t Echo for NatGeo TV, and you did The Marriage Ref for a couple seasons. Why do you think comedians now are getting into this role as the game show host?

Well, I think that the nature of the show has changed. When we were kids, they were kind of daytime and kind of cheese and it was purely about the game. That doesn’t hold up anymore. That’s a corny format. Now, game shows are primetime fare. They need people who are funny and quick on their feet and can keep the thing moving. Comedians are naturally built for that.

All my skills of comedy start to come out. All your years of crowd work, hosting, being funny, it all pours out when you’re in the middle of it. 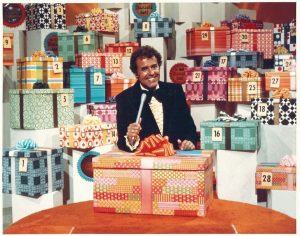 I did like Hollywood Squares, actually. I didn’t even know what was really happening as a kid. Paul Lynde was just weird and hilarious. I really liked—what was it, Treasure Hunt? The one where they had all the boxes all around?

Yeah, that was definitely Treasure Hunt with Geoff Edwards.

Ooh, Love Connection. Someone called it a game show somewhere and I guess it stuck.

It’s a little bit of a game, but more of a talk show. And there’s a reason that Wheel of Fortune and Jeopardy! have stayed on for a zillion years, that pure gameplay is just so good. But yeah, Treasure Hunt was awesome. I also liked the one where everyone is dressed up, that they’re redoing now…

Yeah, Let’s Make a Deal. That was always fun to me. As a kid, I just loved seeing grown-ups dressed up in outfits and then losing their minds. Seeing a woman dressed up like a goat and crying on national TV… how are you turning that off?

And you kind of have that now, because now we can just watch full-grown people covered in what you are claiming to be mustard.

Exactly. I have to say, that’s the one thing: I just took the gig and I said, “Oh, I can be funny.” That’s my whole criteria: can I be funny in hosting this thing? And, I knew people covered in stuff? That’s a no-brainer. Yes, I can be funny. But when you’re out there, and people have a chance to win all this money, and the clock is ticking, and there’s this big giant thing that could explode and both of us could get hit with stuff, it became very real very fast. People are saying that me running away is really funny, and my reactions and stuff. It’s purely natural. You just kind of get caught up in it. People are three seconds away from either being totally humiliated or winning more money than they’ll ever make in their life. You can’t help but get swept up in it.

Absolutely. You look really genuine in your terror and elation. Do you find that you really connect with these contestants quickly?

Oh, 100%. That’s the thing as a comedian—we’re not good at faking stuff. That comes back to your earlier question, of why comedians are doing this. I’m a comedian. I’m honest. I’m not going to be corny and pretending that I’m going to like people and pretending this is fun. I’m telling you—you stand out there and these people are looking for help. You are their help. And most of them are pretty cool. The pressure’s building and the money’s getting bigger. It’s very real. You don’t have to pretend. 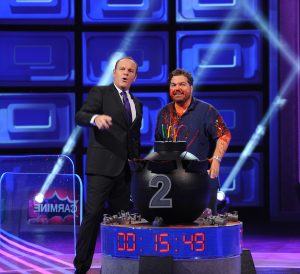 I’ve ragged you on Twitter for this. That stuff in the bomb. That doesn’t look like gravy to me. That’s not mustard. You say it’s mustard. I don’t believe it. Or, I don’t know how it is in North Jersey, but in Philly, where I’m from, mustard tends to be smooth and not so chunky.

[laughter] No, mustard definitely has chunks. Yeah, if you go with Gulden’s, it has chunks in it. But if you go even more hardcore, like with real Polish mustard, that’s going to be chunky. If this was purely just gravy, people would be eating it. And they are not.

The things in the bomb: contestants are not encouraged to take a lick, are they?

People who make these bombs are not very nice people.

Who decides what goes in the bombs?

Good question. Some evil crew guy who’s probably been working on game shows for a long time and now has an opportunity to blast stuff all over the host. He’s probably up at night coming up with new ideas.

I get a lot of people telling me that this game should be on a kid’s network because grown-ups are getting messy and that’s tacky.

My kids really love it, their friends really love it, and their parents really love it. For a while, as a family, we were watching Wipeout, and we were watching AFV a lot together. There’s so little programming that the whole family literally can watch. You don’t want to shove it off and say, “This is a kids show.” Kids don’t know some of these questions, about geography or pop culture. They know they’re going to see someone that looks like their dad possibly covered in gravy. That’s exciting to them. But then, the parents are into it because they know what $300,000 really means and they know the answers to these questions. So, it’s a family show. It’s not a kids show, it’s not an adults show. That’s what’s great about being on all summer. Oh, cool. Thursday nights, all summer long, a family can sit and have a blast. 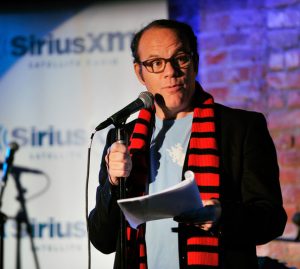 What’s on the horizon for you, professionally, personally? What’s going on with you?

A lot of stand-up. I’ve been out on tour a lot this year, and I’ve taken a little hiatus in the summer, and I’ll be going back out in the fall, which is all leading up to shooting my next comedy special. That’s really busy. My Come to Papa show, which is a SiriusXM show and it’s also available online, that’s really taking off, so I’m spending a lot of time there. I do two shows a week of that, and I also do these live shows with it. We’ll be taking it to the Montreal Comedy Festival. Between those two things, that’s really kind of keeping me busy. You know, I’m always looking for the next film thing or TV thing, and those always kind of pop up. But the great thing is I can always go to work on stand-up. It’s a great thing.

Ok. A lot of my readers have tuned out because we’ve started talking about other things. And that’s ok; they won’t read this. That’s fine, I can ask you whatever I want and it doesn’t even matter. Cake or pie?

What kind of pie?

I like standard apple. I put blueberry as a close second.

Ooh. Blueberry. That’s a daring choice. Are we talking al a mode, or whipped cream even, or just standard?

If you were given an infinite amount of money to host any other game show other than BOOM!, what game show would you want to host and why?

Ehhhhh, no. There’s no game at the end there. It’s a raffle, basically.

I’d like to be the Center Square. It’s not the host, but it’s kind of like the co-host.

You can watch BOOM! tonight at 8 PM Eastern on FOX. Check out Tom Papa’s website at TomPapa.com.