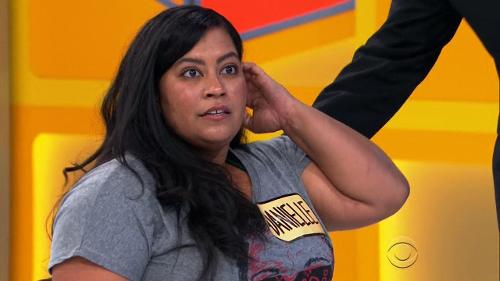 Awkwardness unfurled on yesterday’s Price. Here’s why it had to happen that way.

For the past 24 hours or so, the Internet has been making an enormous deal out of yesterday’s Price is Right, wherein host Drew Carey presented a lucky contestant with the chance to win a sauna and a treadmill. Problem was, this particular lucky contestant happened to be in a wheelchair, and although said contestant took the faux pas in stride (and won, by the way), bloggers and commenters far and wide have labeled Drew and the show as insensitive and short-sighted for awarding a contestant who can’t use her legs with a prize the use of which one requires legs. One poster on the New York Post Facebook page, bless his heart, went as far as demanding The Price is Right be cancelled.

Angry viewers aside, this situation has raised a lot of questions among casual viewers and Golden Roadies alike. What does the show do if a handicapped contestant wins a prize he or she is physically unable to use? Can’t they just switch it out for something more appropriate? Don’t they have a better way of making sure things like this don’t happen, so that embarrassing moments like these are prevented and the show saves face in light of their rather critical hardcore audience?

First of all, this type of continuity issue is nothing new. Wheel Of Fortune once apologized for its “FAST AND THE FURIOUS” puzzle just days after the death of the racing film series’ star, Paul Walker. Our beloved Price is Right once retroactively gave away a trip to oNew Orleans in the wake of Hurricane Katrina. But for the sake of argument, let’s venture into an alternate universe—one in which our handicapped contestant makes it on stage, a producer cries “Cut!”, and our soon-to-be-revealed treadmill is switched, thereby preventing a Showcase full of awkwardness.

Replacing the prize is easier said than done for a couple of reasons, one of them being the backstage area at Price rivals that of the most elaborate Las Vegas stage show. Prizes, props, and talent are constantly being shuffled here and there as dozens of crew members attempt to seamlessly put together the capitalist carnival that appears on CBS viewers’ screens every morning. There simply isn’t enough room in the bowels of Studio 33—or enough available manpower—to efficiently pull off that sort of switcheroo. Never mind the contractual jungle the Price crew would have to navigate with the suppliers of that rejected prize; after all, Price means never having to say “We’re sorry, but the product placement y’all paid for isn’t happening.”

Then, if you’re fortunate enough to find the space and people power to change the prize, there’s a pretty good chance you’ll also have to replace the game. The pricing game ecosystem is a complex one—some games require a car, others require a higher-end luxury vehicle, several require a grocery cart full of food, and one game in particular requires a big-ticket item with no zeroes, sevens, eights, or nines in its price. Combine all of that with the fact that every game has a set run time, and the pricing game selection process becomes its own sort of alchemy, producers running around the lab days before showtime racking their brains to come up with that perfect 44-minute formula. If a game comes out of the lineup, a considerable amount of time comes with it. Can a new game be set up in a reasonable amount of time? Are the props ready? After all, we didn’t think we were going to be playing that game this week, so its props are way back in storage somewhere. Do we have the prizes we need for that game? Will Drew and the rest of the crew be alright out there? We didn’t rehearse this new game the way we rehearsed every other aspect of the production prior to showtime.

While all of these questions are being thrown around the studio, there’s still the matter of the entire studio audience watching with anticipation, their frantic energy ready to peter out at a moment’s notice. It’s up to the announcer and other staffers to keep their 300-person audience machine perked up and ready for primetime (or daytime), but stopdowns are a frequent occurrence in this live-to-tape universe. Look around YouTube and you’ll see Drew and announcer George Gray get down with some improv on the Price stage between takes, among other attempts at keeping the crowd pacified. Three-Headed Opera Singer only works for so long, however, before the people get antsy. Who knows how long a stopdown could take? In the case of the perfect Showcase bid from a few years back, the pause in production was reported to have taken from 30 minutes to over an hour. That doesn’t seem like a long time in real-life numbers, but take a look at Drew’s reveal (to an audience that had no idea he took that long of a break) and it becomes evident just how much of an energy drain a sudden stop can be.

This all adds up to a simple conclusion: Price gave her the treadmill out of necessity, not short-sightedness or insensitivity. In fact, it can be said that, in terms of its contestants, Price has become one of the most diverse game shows on television. Since the Barker-Carey changing of the guard in 2007, the uptick in selection of contestants that may not have made the cut in years past has been apparent. The powers that be have gone the extra mile to show its viewers a much more true cross-section of America, and the show is richer for it, as is daytime television as a whole.