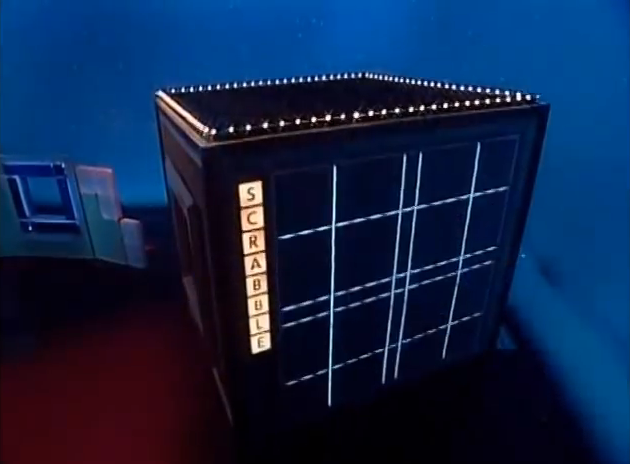 #tbt: The Legend Of The “Scrabble” Cube

Throughout the 80s and into the early 2000s, Mitt Dawson worked as a production assistant at KNBC in Los Angeles on several television productions, including quite a few game shows. Mitt was involved in the production of the 1983-1989 version of Sale Of The Century, the Wil Shriner-hosted game show Small Talk, 1993’s Scattergories with Dick Clark, the pilot episode of the 2002 version of Card Sharks, and many others. One of his longest assignments, however, was Scrabble, the NBC daytime word game produced by Reg Grundy Productions and hosted by Chuck Woolery from 1984 until its initial cancellation in 1990, and again for a 105-episode run concurrent with that of the aforementioned Scattergories in 1993. Before his untimely passing in 2012, Mr. Dawson had been reaching out to the online game show fan community—answering questions from fans on various message boards, uploading videos from his personal collection to YouTube, and telling stories about his days as a crew member on some of the genre’s most fondly-remembered game shows. This is one of those stories.

It was a lot more than just a few torn cables…after the famous Scrabble cube disaster, the cube alone ended up costing over $1 million in 1984 dollars…total construction costs makes Scrabble the most expensive game show set, maybe any TV set, ever built to date.

I was not working for (game show producer Reg) Grundy yet; I got this recount from (Scrabble producer) Bob Noah, (director) Chris Darley, and several stage crew…as well as my crawling around the cube for years.

What you see on TV is really 2 different identical cubes…the first had bundled computer cables several inches thick hanging from a hanger on a spring in the cube’s center running to the 9 puzzle monitors and 10 computers on one wall, and only had enough slack to allow it to spin twice around. By the way, the cube had no roof, just a criss-cross brace, and black batten cloth stretched across the top to keep out the light…otherwise the studio lights would shine through holes in the cube and wash out the projection screen image. 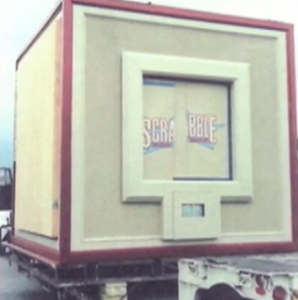 The 1993 model, sitting on the back of a truck at NBC Studios

The middle of the cube’s inside was a stationary platform that did not move, sitting on an industrial crane gear run by a DC elevator motor, its speed adjustable. This platform was for the crossword video projector that was rented and removed when the show was not taping. There were no limit switches or electronic counters built in to regulate how many times it had been spun before it had to be “unspun” to loosen that cable bundle…this turned out to be its falling.

Because of IATSE union rules, a stagehand had to operate the cube; our staff could not touch it. One day, the union replaced the regular guy with someone who didn’t know the cube rules. This happened often and is still common on shows.

The spin control box consisted of only 2 basic buttons, “spin clockwise” and “spin counterclockwise”, plus a speed control, as well as telescope in and out buttons and status lights, which I won’t go into. Anyway, when he got the cue to spin it, he just let it run…by the third revolution and fourth revolution, everyone in the studio could hear loud tearing, ripping, creaking, huge popping noises inside…then suddenly the square cube’s entire metal beam structure became a trapezoid and ALL the neon tubes criss-crossing the 2 outer Scrabble crossword art walls literally exploded…as you can see on the show, the neon tubes are in very tiny wooden tracks. It was loud and a total disaster.

The metal framework was so twisted out of shape that the entire cube had to be completely rebuilt. There was no way to straighten the framework back to square, so they just started over. I don’t have an exact count of how many inner computers were saved—they were very rugged—but the monitors were pulled from their positions by their cables and cracked. The show was down for about 2 months, and a legend was born. 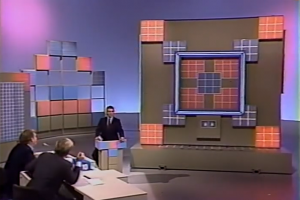 The second cube was built with limit switches that counted revolutions, but it could still get twisted up on itself. The cube also had to be exactly square to the platform in front of it for it to “telescope” out for game play. Several criss-crossing wire cables and pulleys tracked the front wall away from the cube to allow the video projector enough distance to create a large enough image on a screen for the contestants to see the animated crossword.

There were electric jacks that lowered 2 metal beams attached to the front wall framework into the forward platform to confirm that it was square, otherwise it could not telescope, which was often a big problem, as the cube never wanted to stop spinning without help from the crew and almost always spun past the point where it was ready to telescope, and we had to stop tape and do a hot edit of the over the shoulder shot of the contestants looking at the cube as Chuck said “Let’s play Scrabble” and you heard the telescope sound effect.

And there, ladies and gentlemen, is the legend of the Scrabble cube.