Every Thursday, BuzzerBlog salutes Throwback Thursday by revisiting a game show from the past. This week, we showcase The Money Maze.

If you’ve ever seen the 1971 film Willy Wonka and the Chocolate Factory, you’re probably familiar with the story of the fall, and subsequent rise, of the purple-suited sugar magnate. As the story goes, Wonka candies were the most sought-after sweets in the world—that is, until it was discovered that a rival company was sending in spies dressed as workers to steal the secret Wonka recipes. As a result of this sabotage, Wonka closed the factory and vanished for years, only to reappear years later to the delight of the chocolate-loving public. This time, however, the Wonka product line had exploded with dozens of colorful varieties, each one appealing to the various tastes of the discerning candy connoisseur. What’s more, new products were seemingly being invented and released to sweet shops every day. All of a sudden, the once-shuttered Wonka factory had become a supremely fertile warehouse of almost infinite delight to all who experienced the creativity borne from within.

In 1975, game shows were experiencing a Willy Wonka year if ever there was one. While the Slugworthian late-fifties concluded with the damaging crash caused by the quiz show scandals, the genre experienced its first true renaissance fifteen years later. Led by sparkling new kids on the block like The New Price Is Right, The Joker’s Wild and Wheel Of Fortune, game shows outgrew their stodgy past and became spectacles—shag carpet carnivals with answer boards that flipped this way and that, synthesized opuses that captured the ephemeral lilt of the discotheque, behemoth sets that mechanically whisked contestants on and off stage, and games that entertained, challenged and intrigued, all doused with an ubiquitous electric chasing flourescent glow.

In total, 44 different game shows aired in 1975. If you found yourself home during the day around this time, watching television was like being able to spend the morning in a toy store manned by the world’s greatest product demonstrators. You could solve riddles with Geoff Edwards on Jackpot, climb The $10,000 Pyramid with Dick Clark, eavesdrop on the stars with Bert Convy on Tattletales, roll Alex Trebek’s enormous dice on High Rollers, spot the impostors with Garry Moore on To Tell The Truth, circle the hidden words with Jack Narz on Now You See It, and play pinball with Art James on The Magnificent Marble Machine, just to name a few. However, there was one show that, in its eight months on the air, captured the imagination of viewers and brought the concept of the television game show to levels never before navigated by the medium. 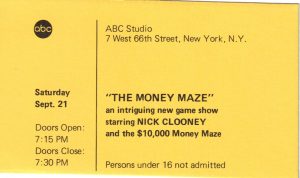 Enter The Money Maze. Produced by Daphne-Don Lipp Productions (a partnership that included Who What Or Where Game producer Ron Greenberg and talk show icon Dick Cavett), Money Maze was a mammoth undertaking. The centerpiece of the set at ABC TV-1 in Manhattan was the titular maze, a 50′ x 100′ square of real estate covered with dozens of zig-zagging pathways, a revolving door, and eight illuminated push-button towers each topped with a 12-by-13 grid of large white LEDs capable of displaying various patterns and symbols. The main idea of the game concerned players competing to find prizes in the maze by running to an assigned light tower within a time limit. The audience was seated in three sections surrounding the maze, which lent a Colosseum-esque feel to the proceedings—indeed, flustered contestants often got a face full of advice from those gallery members while running the maze.

Host Nick Clooney on the set of the pilot (ABC)

Nick Clooney—father of A-lister George and son of singer Rosemary—was the host of The Money Maze. Originally the host of his own popular talk show on WKRC-TV in Cincinnati, Clooney’s first attempt at hosting a game show came in the form of a pilot called Ooh-La-La, produced in 1973. After the producers failed to sell the show to a network, Clooney was approached by Greenberg and friends with the offer to host their new creation for ABC, then titled The Moneymaze (note the lack of space; when it hit the air, Money Maze was two words). Nick accepted the job, and the pilot (viewable at the end of this article) was taped in New York in late 1974. Test audiences adored the concept of the show, and ABC added it to their daytime lineup. Along with another well-liked Ron Greenberg produced quiz show called The Big Showdown, The Money Maze premiered on ABC at 4:00 PM on December 23, 1974. 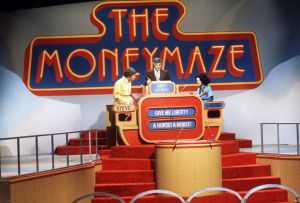 The front game in progress (ABC)

On each episode, two married couples competed. A category was announced, and the couples would take turns assigning one of two displayed questions in that category for the opposing couple to answer. As soon as a couple answered incorrectly (they were allowed to confer), the assigning couple got the chance to answer it themselves. If correct, the couple earned the chance to answer all of the remaining questions in the category. The winning couple at category’s end earned the right to play in the Money Maze, and it was at this point that the excitement would begin.

A contestant guides her husband from the Crow’s Next (ABC)

One member of the couple was the designated runner, while the other half stayed in an area overlooking the maze known as the Crow’s Nest. From this vantage point, the non-running spouse was able to shout advice and directions to their frantic partner down below. The goal was to reach one of those light towers within 15 seconds to win a merchandise prize. A funky urban drum-and-bass track composed by Score Productions’ David Sheniak played as, like safari-jacket wearing mice, the contestants rushed through the maze while being shouted at to “GO LEFT! MAKE A RIGHT! GO THROUGH THE DOOR! HIT THE BUTTON!” This process was repeated throughout the show and, after a final round in which the trailing team was given the opportunity to catch up, the couple with the highest score moved on to the $10,000 Dash. 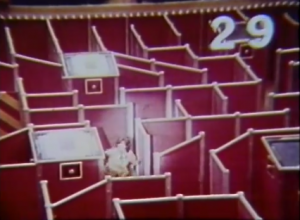 In the Dash, the running team member made his or her way through the maze, with the goal of capturing the four zeroes and the “1” that make up the $10,000 (each number was lit up on five of the eight towers throughout the maze) and making it out of the maze in sixty seconds or less. As in the main game, the other spouse was allowed to shout directions to the maze runner. This was undeniably the most exciting part of the show; the explosions that occurred when couples won the big money were electrifying. Winning couples stayed for three days, or until they won the grand prize.

The show was well received upon its premiere episode (wherein both couples, having ended the main game with a tie score, both played—and won—the $10,000 Dash). Unfortunately, after a few weeks, the ratings were a different story. Money Maze came about at a time when many ABC affiliates were using the 4pm time slot for their own local newscasts and original programming. As a result, not many stations carried Nick Clooney’s maze game. Later attempts at jazzing the show up—offering a $500 bonus for reaching a second goal in the main game, a week of shows with kids’ pieman Soupy Sales and stage actress Anita Gillette, doubling the end game jackpot to $20,000—proved unsuccessful in roping in more viewers. Combine the show’s ratings issue with the fact that the monstrous set took two days to put up and take down for each taping session (producer Don Segall once joked that the show was the only one on television where the crew took home more than the contestants), and the writing was on the illuminated zig-zagging wall. The Money Maze went off the air on June 27, 1975.

Nearly four decades after its cancellation, The Money Maze is fondly remembered by many game show fans, as well as its host—in 1998, Nick Clooney wrote a column for The Cincinnati Post in which he reminisces about his short-lived game show career. There may even be some life left in the old girl yet—in 2009, Ron Greenberg and Don Lipp mounted a pilot for a revival of The Money Maze on French network TF1.

In the vast patchwork quilt of game shows, The Money Maze is quite the multicolored chevron. With its larger-than-life set, one-of-a-kind gameplay, charming host, and heart-pumping soundtrack, the show stands as a reminder of the creative and imaginative spirit embodied by one of the most unique periods in the history of the game show genre.