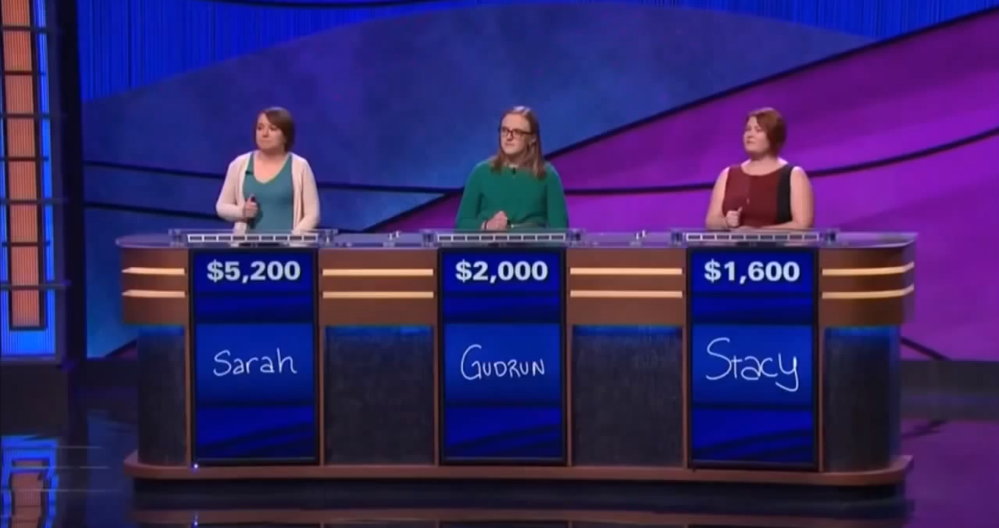 All the Brainy Ladies (Put A Quiz On It)

Where are all the quiz women?

As Julia Collins plays her 20th-straight Jeopardy! match tonight, I’ve wondered why it seems that only recently, there’s been an influx of notable women quizzers. At least in my lifetime, there have only been a handful of successful women on game shows and quiz shows, quiz tournaments and high school bowls. So rare is a successful woman on a quiz show that her mere competency is cause for celebration. Troubling, to say the least. I wondered about this on Twitter and engaged in very insightful conversation with quiz show writers, former Jeopardy! contestants and current game show fixtures about women in quiz. I’ve invited Season 3 Only Connect champion and QI elf Jenny Ryan to give her unique insight on the topic of women in trivia. 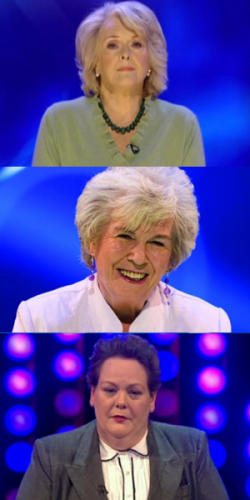 The most visible quizzers on UK TV are the Eggheads and the Chasers—professional, hardcore quizzers, selected from the upper echelons of the national quiz rankings or on the back of major TV quiz success. This is the ultimate goal for most people who take their hobby seriously enough to travel the country and the continent in order to answer questions about beekeeping, Belgian comic books and Nordic skiing—even if they deny it outwardly, they’d love to be paid to learn and regurgitate facts and be commended for being a know-it-all.

To date, there have been 8 Eggheads and four Chasers. Twelve professional quizzers—of which just three are women.

A quarter. That makes me sad, because I don’t see the retention of general knowledge as a gendered thing. I do, however, wonder if there’s a cultural conditioning which means our smart women get a harder time of it when they choose to show off just how smart they are.

Women (not) on top

It seems that the more ‘serious’ the quiz show, the fewer women you will find. Whilst the popular (read: lowbrow) quiz shows like In It To Win It get pretty much a 50/50 gender balance, series like Mastermind can struggle to attract sufficient numbers of female contestants, and in fact have to loosen their own rules about not appearing in consecutive seasons. You’ll frequently hear male quizzers chunnering resentfully about women being allowed to simply “walk on” whilst they themselves are held on a perpetual waiting list. I can think of at least one occasion on which I was asked by male quizzers to join their team, essentially as the token woman who would improve the chance of being cast (I said ‘no’, by the way).

One factor that can’t help the low application rate is the response that some female quizzers have attracted, simply for putting their heads over the knowledge parapet. The dreaded ‘media’ take a fair bit of the blame. Whilst dozens of equally brainy male contestants pass through with nary a comment from the national press, watch what happens when a Girl appears on University Challenge as a team captain who does rather well. The press goes crackers. If you’ve never heard of Gail Trimble, go Google her now. I’ll wait here.

Yes, our newspapers made quite the fuss of intelligent, academic and, by all reports, very nice Ms. (now Dr.) Trimble. Firstly, by remarking on her tremendous knowledge and recall as if it were hugely shocking (the woman was a Classics post-grad at Oxford; of course she’s brainy. Duh). Then came references to her looks—“gorgeous, pouting” “thinking man’s crumpet” and worse—before degenerating into sniping and bitching about her appearance and supposed smugness, and culminating in an offer to pose semi-nude in a lads’ mag.

Dr. Trimble has, unsurprisingly, discontinued her quiz career. As have a number of other young female quizzers who have suffered similar backlash from UC/other highbrow shows, any of whom who may have been potential Chasers or Eggheads or World Quiz Champions.

You can never be too thin, too rich or too good at quizzing

Is it any wonder women are a bit hesitant about putting themselves forward to be judged on their general knowledge, when there’s a distinct possibility that if their knowledge is too good, they’ll get judged on their looks, assumed personality traits, outfit etc. in a much more vicious way than any male would? I can only see this being even more of an issue in the age of Twitter (#smugbitch, etc.) Outside of quiz, see also the history academic Mary Beard and the misogynistic crap she’s been subjected to. Simon Schama doesn’t have to put up with that nonsense.

I’ve made a high-tech flow diagram to illustrate what happens when brainy folk appear on the TV.

Editor’s note: this was a charming handwritten chart that I’ve recreated for clarity. Sorry, Jen. 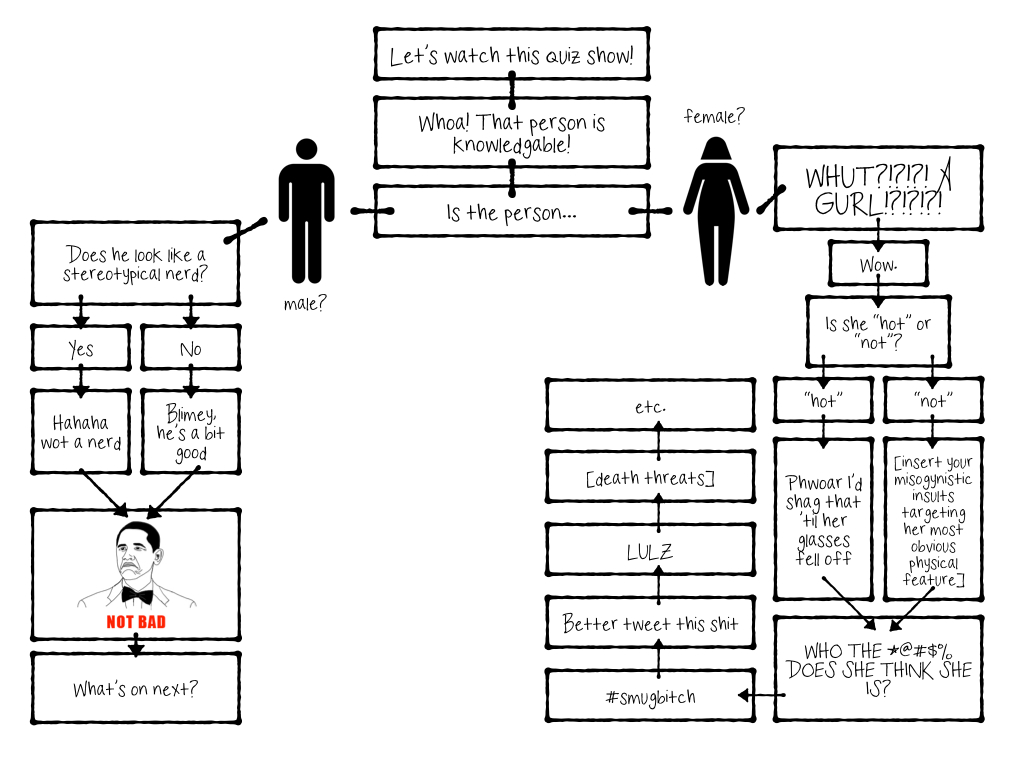 I suspect what it comes down to is a cultural norm: women can’t be cleverer than men. Which is, of course, total nonsense (compare this to the old comedy argument that goes “…but women just aren’t funny”) but clearly lingers.

How are we going to kick that outdated concept’s ass and run it out of town?

Smart women—get your brains out for the lads (and lasses)

We’ve got quiz role models—do you think that it makes any difference to Daphne Egghead or Anne Hegerty from The Chase if some jumped-up newspaper columnist, blogger, or Twitter troll remarks on the way they look? Even if it did, they’d never let it show – they’d keep their heads, and vent their anger by crushing yet another challenger.

Let’s be brave, be bold, and make “smart women being smart in public” the new cultural norm. Until then, when I next appear on a TV quiz show, please keep me away from Twitter.

N.B. I genuinely didn’t intend this to become a call to arms but I got furious during the writing process. I’d love to hear people’s thoughts – if you’re on Twitter use #QuizWomen. 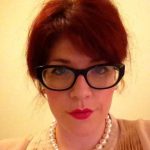 Jenny Ryan has been quizzing all her life. Literally. Even before she could write words she could scrawl a question mark. Since those early formative years she’s appeared on many UK quiz shows, including University Challenge, Mastermind, Are You An Egghead?, Fifteen to One, Weakest Link and Only Connect. Making use of her ability to form a ‘?’ freehand, she’s also worked behind the TV scenes: as a question writer/verifier on shows like Weakest Link, and by slinging obscure facts at Stephen Fry as an Elf on QI. When not doing the quizzy stuff, Jenny earns a crust as a social media maven and a singer/ukulele-botherer.