As she retires from the UK series “Eggheads,” we look back at the career of a pioneering figure in game shows and one of the world’s greatest quiz champions.

These days on Jeopardy!, the smart money’s on Julia Collins. Dominating her competition with her vast knowledge and lightning-fast reflexes, Collins has handily defeated 32 contenders during the last 16 episodes. In addition to the $337,700 she’s earned thus far, she’s also become the longest-reigning female Jeopardy! champion in the show’s 50-year history with no signs of slowing down. She’s the duchess of Daily Doubles, the First Lady of the first podium.

However, she’s not the only woman to have earned her stripes in the quiz arena. Many female contestants before her have come, seen and conquered game shows—Nancy Christy, for example, became America’s first female grand prize winner on the syndicated Who Wants To Be A Millionaire. Judith Keppel was the first ever to win the million-pound prize on the UK version of the show. In relative antiquity, Dr. Joyce Brothers studied the sweet science of boxing and broke the bank on The $64,000 Question in 1955. However, there’s one woman who, over the past 35 years, has cemented her spot in the big book of game show champions—as well as her place on the most formidable quiz team on British television. 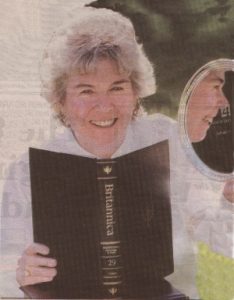 Like many game show fans, Warwickshire native Daphne Fowler has always considered knowledge to be precious. Having spent several years on a seasonal charity quiz team, her true calling came to her one night in 1979 as she was watching the classic British quiz Winner Takes All, hosted by comedian Jimmy Tarbuck. As she answered with seemingly little difficulty the vast majority of the questions the on-screen players missed, her kids suggested she apply to be a contestant. When Daphne said she was too busy to write, her kids did it for her. Later that year, she appeared under the name Daphne Hudson (she had not yet married her second husband, Peter Fowler, whom she had met when Peter was a quizmaster at a local pub). Mrs. Hudson put forth a valiant effort and came in second. Despite the loss, Daphne fell in love with the process—the travel, the five-star accommodations, the thrill of the game. This was far from the last time viewers would hear the name Daphne Fowler. 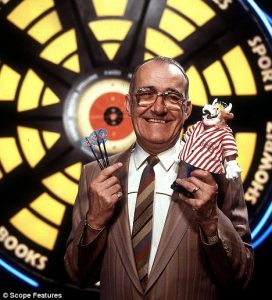 Bullseye host Jim Bowen in front of the famous dartboard.

Following her Winner Takes All appearance was a stint as a contestant on the athletic game show Bullseye in 1982. Since Daphne was obviously the brains of the operation—the “knower”, as Bullseye host Jim Bowen would call her—she brought along her husband the “thrower”, Bernard Hudson. However, Bernard was so nervous on camera, he had a hard time throwing the darts under pressure. Daphne’s team won the game, but failed to take home the star prize. No matter—there would be others.

And boy, were there ever. The following year, she hit pay dirt as a champion on Sale of The Century. After Sale came appearances on Masterteam, Jeopardy!, Runway, 100% Gold, Whitaker’s Almanack Champions’ Challenge, One to Win, and the radio version of BBC’s Mastermind.

In addition, she was flown to Australia in 1987 and 1988 to take part in two Sale Of The Century World Championships (her husband passed away shortly after the recording of the second playoff match). She was 1988’s Going for Gold series champion, 1997’s Brain of Britain, and two-time champion on Fifteen to One (where she holds the second-highest score of all time). She’s come away from these appearances with thousands of pounds in winnings, as well as a new car. Then the Eggheads came a-knockin’.

In 2003, following an article in The Guardian in which she and several other prominent quizzers were dubbed “The Dream Team,” Daphne was approached by 12 Yard Productions seeking her participation in a new quiz show to air on the BBC.

The premise was rather simple—contestants would face what could be considered the trivia X-Men, an assortment of high-octane quiz junkies whose job it would be to defeat all comers. Daphne agreed to take part. The pilot was shot soon after, and Eggheads premiered on the tenth of November in 2003. To date, the Eggheads have only been defeated 109 times in 1,254 episodes—most recently, on yesterday’s broadcast.

Due in no part to yesterday’s loss, today marks Daphne Fowler’s final performance as an Egghead—she announced in November her intention to retire at the end of the current season. As talk begins to swirl around in game show and quiz enthusiast circles about who could possibly replace her, one can only stand back and marvel at Daphne Fowler’s many achievements over the past few decades, and celebrate the trail she blazed for female quiz competitors in the UK and abroad.

Editor’s Note: The article has been updated to reflect Daphne’s first husband, Bernard Hudson, and his appearance on Bullseye with Daphne.