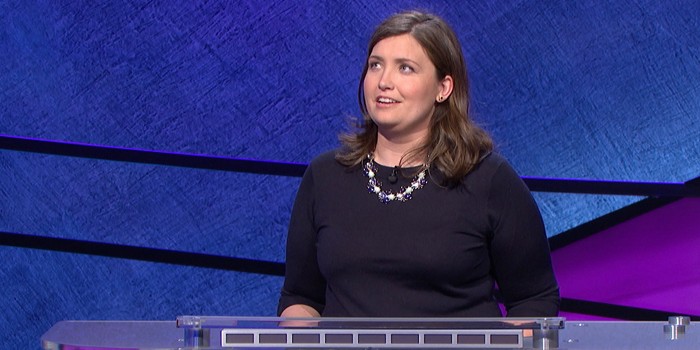 Why Isn’t Anyone Paying Attention To Julia Collins?

Julia Collins is shaping up to be this season’s Jeopardy! juggernaut, but why isn’t she getting the press she deserves?

With 15 wins under her belt and the sky as the only limit, Julia Collins is the model of the ideal Jeopardy! champion. Her impressive knowledge and fast reflexes have given her the advantage is almost every game she’s played. Why does it seem that she’s not getting as much press as the show’s last double-digit champion, Arthur Chu?

I for one think I’ve gotten a lot of attention for @Jeopardy, but @HuffingtonPost seems to disagree: http://t.co/xjE1DeGD3u

Although she denies it herself, it seems that it’s taken longer for the mainstream media to note Julia’s success. This chart shows a Google Trends chart of both Arthur Chu and Julia Collins’ during their respective runs. The chart’s x-axis is not steady and should be ignored, but the peaks, which I’ve labeled, show that Arthur got more Google interest during his run than at similar points during Julia’s. It took Julia 15 games to reach the Google reach that Arthur Chu did in four.

Why is she not getting more attention? It could be because her play style is more orthodox than Chu’s was. It could be that her demeanor is more laid back than his was. Some people point to racial or gender bias in the media.

Whatever the cause, as Julia surges past the 15-game mark, she should be commended for her depth of knowledge, fast reflexes and humble nature.